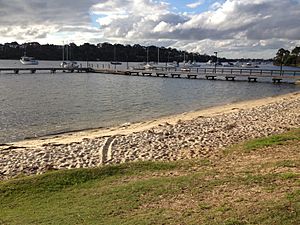 Formally known as Bicton River Jetty, and Jetty 1248, it is known to the local Aboriginal people, the Whadjuk Noongar people, as Kwoppa Kepa, meaning 'beautiful water' in Noongar.

Bicton Baths was initiated by the local Melville Amateur Swimming Club, a group who had previously utilised the jetty of the quarantine station jetty as a platform. In 1946 the Melville Water Polo Club was founded at the baths, a move which resulted in the Bicton Pool being built in 1979.

The baths themselves consist of a wooden U-shaped jetty which contains exit ladders. Bicton baths is located in a tidal gorge, and is heavily influenced by ocean water inflow. It contains a variety of wildlife, including algae, anemones, crabs, dolphins, fish, nudibranchs, shrimp, sponges and starfish.

All content from Kiddle encyclopedia articles (including the article images and facts) can be freely used under Attribution-ShareAlike license, unless stated otherwise. Cite this article:
Bicton Baths Facts for Kids. Kiddle Encyclopedia.