Bierrum is a British (Danish heritage) civil engineering and construction company, that has built all of Britain's concrete cooling towers at the country's power stations since 1965. 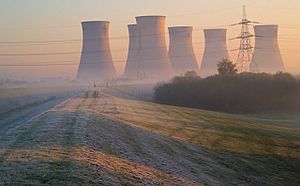 It was founded by Hans Bierrum (or Hans Bjerrum), a Danish civil engineer, who arrived in Britain at the same time as Ove Arup, another Danish civil engineer. He built his first cooling tower in the 1930s. Hans Bjerrum, born in Hellerup, competed in the 1920 Summer Olympics in Belgium; he died in 1979 in London. The company has also been called Bierrum International.

It is headquartered in Central Bedfordshire, around one mile east of the M1, close to the Greensand Ridge Walk.

It has designed and built cooling towers (køletårn in Danish) and chimneys nationally and internationally. It demolishes chimneys incrementally, with its Bierrum Rig.

All content from Kiddle encyclopedia articles (including the article images and facts) can be freely used under Attribution-ShareAlike license, unless stated otherwise. Cite this article:
Bierrum Facts for Kids. Kiddle Encyclopedia.