North Walsham is a market town and civil parish in Norfolk, England, within the North Norfolk district.

The civil parish has an area of 11.3 sq mi (29 km2) and in the 2011 census had a population of 12,634. For the purposes of local government, the parish falls within the district of North Norfolk.

The town is 7.5 mi (12.1 km) south of Cromer, and the same distance north of Wroxham. The county town and city of Norwich is 15 mi (24 km) south. The town is served by North Walsham railway station, on the Bittern Line between Norwich, Cromer and Sheringham. The main road through the town is the A149. The town is also located on the B1145, a route that runs between King's Lynn and Mundesley.

The town is on the North Walsham & Dilham Canal (privately owned by the North Walsham Canal Company). The canal ran from Antingham Mill, largely following the course of the River Ant, to a point below Honing. A short branch canal leaves the main navigation near Honing and terminates at the village of Dilham. 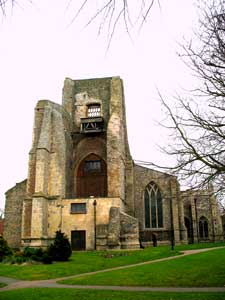 The ruined tower of the parish church

North Walsham, an Anglo-Saxon settlement, and the neighbouring village of Worstead became very prosperous from the 12th century through the arrival of weavers from Flanders. The two settlements gave their names to the textiles they produced: "Walsham" became the name of a light-weight cloth for summer wear, and "Worsted" a heavier cloth. The 14th century "wool churches" are a testament to the prosperity of the local mill owners. North Walsham's church of St. Nicholas was originally dedicated to the Blessed Virgin Mary and is one of the UK's largest parish churches. It was also the site of a wayside shrine to St. Thomas of Canterbury. This church had the second-tallest steeple in Norfolk until its collapse in 1724. Plans for its rebuilding were abandoned at the outbreak of the Second World War. The ruined tower dominates the town centre and is a famous landmark of the area, visible from many miles away. In the parish church of St. Nicholas can be found the ornate tomb of Sir William Paston; the remains of medieval painted screens; a telescopic Gothic font canopy; a unique Royal Arms Board; an ancient iron bound chest; and many other ancient artifacts.

North Walsham was involved in the Peasants' Revolt of 1381. The peasants' leaders were defeated at the Battle of North Walsham and the site is marked by a wayside stone near the town's water towers.

The English naval hero, Horatio Nelson and his brother William were educated at Paston Grammar School in North Walsham, founded by Sir William Paston (of Paston Letters fame) in 1606. Nelson left the school to start his naval career at the age of eleven. The school became Paston College in 1984.

As part of the millennium celebrations, ten mosaics were commissioned, showing scenes from local history, including the Peasants' Revolt and the Great Fire of North Walsham and a picture of a Norfolk wherry – an allusion to the canal.

North Walsham Picturedrome opened in King Arms Street around 1912 and survived until around September 1931. In 1931 the Regal Cinema opened in New Road and was open until 1979. When the Regal closed the building was turned into a bingo hall and it is now occupied by North Walsham Plant Hire. 32 years later, North Walsham now has a cinema once again, in the form of the Atrium which opened in 2011. The Atrium is a state-of-the-art theatre and cinema with regular screenings and special events around the films.

The Great Fire of North Walsham took place on 25 June 1600. It began at six o'clock in the morning from a house occupied by a person with the surname of Dowle. Dowle subsequently fled and was captured and placed in gaol. The fire was devastating and destroyed one hundred and eighteen homes, seventy shops, the market cross and market stalls. Although the church caught fire in five places it remained mostly unharmed and provided shelter for the people whilst the town was rebuilt.

North Walsham High School is a community school, for pupils aged 11 to 16 located in the town. The school includes a £5.3m arts and education development called the Atrium which is open to the wider community, funded by the initial co-location funds of reanimating communities. The building belongs to North Walsham High School, but the theatre, cinema, workshop and events programme is run by a registered charity. The charity (The Atrium North Norfolk Ltd) formed in early 2013 and operates as 'the Atrium'.'''''

North Walsham is home to a London 1 North rugby team. North Walsham R.F.C. narrowly missed out on promotion to National League 2 in 2005–06, losing a play-off to Nuneaton. It is also home to the North Norfolk Vikings Swimming Club who train at the Victory Leisure Centre on Station Road. You will find North Walsham parkrun every Saturday morning which is a free, timed 5k event at 9am at North Walsham High School. England footballer Lauren Hemp was born in the town and played for the local team as a child.

All content from Kiddle encyclopedia articles (including the article images and facts) can be freely used under Attribution-ShareAlike license, unless stated otherwise. Cite this article:
North Walsham Facts for Kids. Kiddle Encyclopedia.