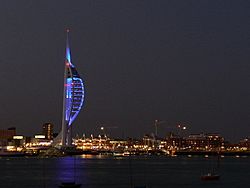 The Spinnaker Tower is a 560-foot (170 m) landmark observation tower in Portsmouth, England, UK. It is the centrepiece of the redevelopment of Portsmouth Harbour, which was supported by a National Lottery grant. Its shape was chosen by Portsmouth residents from a selection. The tower, designed by local firm HGP Architects and engineering consultants Scott Wilson and built by Mowlem, reflects Portsmouth's maritime history through its being modelled after a sail. The tower was opened on 18 October 2005.

The tower is owned by Portsmouth City Council, but operationally it is managed by Continuum Leading Attractions, a cultural attractions group based in York. Continuum also runs five other visitor attractions across the country. Following a commercial sponsorship deal with Dubai-based Emirates airline, the tower was renamed the Emirates Spinnaker Tower in July 2015.

The tower, at a height of 560 feet (170m) it is 2+1⁄2 times as high as Nelson's Column, making it one of the tallest accessible structures in the United Kingdom outside London. The tower is visible around Portsmouth, changing the horizon of the area. It can be seen from the Isle of Wight, the Manhood Peninsula and even Highdown Gardens in Worthing.

The tower represents sails billowing in the wind, a design accomplished using two large, white, sweeping metal arcs, which give the tower its spinnaker sail design. The steelwork was fabricated by Butterley Engineering. At the top is a triple observation deck, providing a 360° view of the city of Portsmouth, the Langstone and Portsmouth harbours, and a viewing distance of 23 miles (37 km). The highest of the three observation platforms, the Sky Deck, has only a wire mesh roof, so visitors are open to the elements. The windows extend above head height, so it is not possible to get a view unobstructed by glass. A glass floor is located on the first viewing deck at 100 metres above sea level. The tower has a design lifetime of 80 years.

The design is similar to the Burj Al Arab in Dubai, whose structure is a little less than twice as tall at 323 metres (1,060 ft).

Planning began in 2000; construction began 2001 and was completed in mid-2005, due to repeated delays and extra funding requests by the builders Mowlem. Completion was six years later than the planned opening date of 1999, which was chosen to coincide with Millennium celebrations. The tower, originally called Portsmouth Millennium Tower, was renamed Spinnaker Tower.

The overall development project was over budget, with the tower costing £35.6 million alone. Taxpayers were never intended to fund the tower, but Portsmouth City Council eventually contributed £11.1 million towards construction.

In March 2004 Portsmouth Council's former leader Cllr Leo Madden resigned as leader of the Labour Group on the council after a highly critical report of the council's handling of the project and its failure to exploit revenue opportunities, such as the Millennium. Barry Smith, the project's legal advisor, also retired after being suspended on full pay, mostly because of controversy over the contract with the builders, which at one point would have cost the council more to cancel than to complete.

The tower has suffered from a number of issues since opening, including a malfunctioning external glass lift. During the final construction phase a protester from the rights group Fathers 4 Justice scaled the tower wearing a high-visibility jacket and unfurling a banner in the process. Another incident happened a year later when a base jumper managed to get past site security and jumped off the Tower; he quickly ran off site after parachuting down.

The tower was dedicated on 16 October 2005 and opened two days later. On opening day the tower's project manager, David Greenhalgh, and representatives of Mowlem and Maspero were stranded in its malfunctioning external lift (built by Maspero) for an hour and a half. Abseiling engineers were called to rescue them. Some, including the franchise's chief executive, felt it was rather fitting that these particular people had been trapped. The external lift was removed during December 2012.

Once open the tower attracted crowds in excess of expectations, despite only the internal lift working, with more than 600,000 people visiting it in the first year. It is one of a number of observation towers around the world that have become popular, including Vancouver's Harbour Centre, Toronto's CN Tower, Blackpool's Tower and Shanghai's Oriental Pearl Tower.

In June 2006 the local press raised a concern that the tower might be forced to close. All public buildings in the UK require disabled access under the 1995 Disability Discrimination Act. With the external lift inoperative and only a single internal lift and stairs available as emergency escape routes, disabled people were not allowed to access the tower if they would be unable to use the stairs because a minimum of two escape routes are required by law. This problem was rectified by investing in an evacuation chair, and training staff to use it. In the event of evacuation, should the internal lift be inoperable, those unable to navigate the 570 steps can use the evacuation chair.

The Spinnaker Tower, being a landmark of southern England, features in the title sequence of the BBC South Today news programme. It also features on ITV News.

In June 2009 the tower's operators succeeded in gaining permission for a freefall ride to be attached. As of 2015 this remains only a plan.

In 2006 the tower won the RICS Project of the Year award and the RICS Regeneration award.

All content from Kiddle encyclopedia articles (including the article images and facts) can be freely used under Attribution-ShareAlike license, unless stated otherwise. Cite this article:
Spinnaker Tower Facts for Kids. Kiddle Encyclopedia.