The Big Apple Coaster (formerly Manhattan Express and The Roller Coaster) is a steel TOGO hyper virtual reality roller coaster at the New York-New York Hotel and Casino on the Las Vegas Strip. The ride's trains are themed to New York City taxicabs. It is the only roller coaster by TOGO still operating in North America. 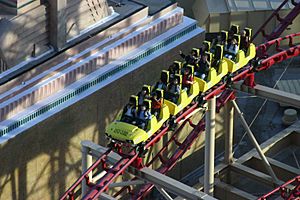 The original TOGO-built train of The Roller Coaster; this train set has been replaced with a new train set built by Premier Rides

Built by TOGO, it had a reputation in the past for being a rough, even painful roller coaster. Some riders have gotten bruised on the shoulders from the old trains due to the roughness of the ride and negative G-forces.

In 2004 Premier Rides installed magnetic brakes on the ride. In August 2006, Premier also installed new trains to replace the original TOGO trains. Since the Premier train installation, the ride has been noticeably smoother, as opposed to when the TOGO trains were in use. For 2018, a virtual reality option was added.

For the 2021 season, the ride received yet another set of new trains from Premier Rides; a far more modern variant that were first seen on the Sky Rocket II models. These consist of more open-air seating and can hold up to 18 riders, thus increasing the coaster's capacity. Testing began in December 2020, with the ride slated to reopen in February 2021. However, an accident occurred in mid-December, where the middle car of one of the new trains derailed on the lift hill, causing severe damage to part of the catwalk. The ride reopened on January 30th, 2021.

This ride begins with a 180-foot (55 m) lift and a 76-foot (23 m) drop, followed by a hill and a 144-foot (44 m) drop. The train then traverses two inversions, a standard vertical loop and a dive loop (twist and dive element), where the train performs a 180-degree spiral and then performs a half-loop maneuver. This element is found on another coaster: the "Mega Coaster" at Hamanako Pal Pal Park in Japan. The rest of the ride is executed on the roof of the casino, and features small hills and a helix into the brakes. The ride's station is themed to a New York City Subway station.

Currently, the ride costs $15 per individual ticket ($20 with virtual reality) and $8 for a re-ride. A combination regular/VR ride ticket costs $28 and an all-day pass can be bought for $26. Las Vegas residents with valid ID, and military personnel also receive discounts.

All content from Kiddle encyclopedia articles (including the article images and facts) can be freely used under Attribution-ShareAlike license, unless stated otherwise. Cite this article:
Big Apple Coaster Facts for Kids. Kiddle Encyclopedia.