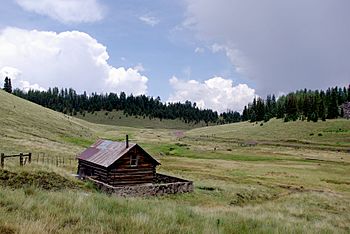 Big Lake is considered one of the White Mountains' best fishing lakes, because of its size, productivity and visitor amenities. As with most trout waters in Arizona, catch rates are best in spring, during late April and May after the winter ice thaws, and get better later in the summer and into fall until the lake freezes over again in late November. Big Lake is in Apache County and is managed by the Apache-Sitgreaves National Forests.

Big Lake has 680 acres (280 ha), with an average depth of 30 feet (9.1 m). Primary fish species here include rainbow, brook and cutthroat trout, with an occasional Brown trout. Each year, the Department stocks an average of 480,000 fingerling (three inch) and 50,000 subcatchable (six inch) trout. Most of these are rainbows.

All content from Kiddle encyclopedia articles (including the article images and facts) can be freely used under Attribution-ShareAlike license, unless stated otherwise. Cite this article:
Big Lake (Arizona) Facts for Kids. Kiddle Encyclopedia.