Four historic bridges on the Big Thompson River in Larimer County, Colorado survived its flood of 1976, but since have lost most of their historic integrity. They were built in 1933 and 1937. All four were listed on the National Register of Historic Places in 2002, and two were delisted in 2010.

All four were camelback pony truss bridges that were designed by the Colorado Department of Highways and fabricated by Midwest Steel & Iron Works. Bridges III and IV were put together by Lawrence Construction Company in 1933, and bridges I and II were put together by contractor M.E. Carlson four years later.

The bridges were deemed significant for representing transportation and for their preserved structure. Bridges I and II were removed from the National Register on November 29, 2010. Delistings from the NRHP usually occur when a listed building or other structure is demolished or if its historic integrity is otherwise severely compromised. Bridges III and IV have been substantially renovated in place so far that their camelback truss structures are entirely gone, but they currently remain on the Register.

The four bridges were identified as conforming to terms defined for historic bridge notability as defined in a 2000 study. 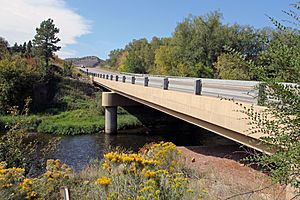 The Big Thompson River Bridge III on US 34 at milepost 85.15 in Loveland, Colorado is a historic bridge built in 1933. It was a Camelback pony truss bridge that was designed by the Colorado Department of Highways, fabricated by Midwest Steel & Iron Works and put up by contractor Lawrence Construction Company in 1933. The structure had length 134 feet (41 m) with main span length of 100 ft (30 m). Its superstructure was steel, rigid-connected camelback pony truss and its substructure included concrete abutments, wingwalls and piers. It had a concrete deck with asphalt overlay. The site was modified c.1980 by addition of flex-beam guardrails at approaches.

The bridge was deemed worthy of historic designation largely for its engineering; like the others, it was a rigid-connected camelback pony truss bridge built of steel, and the four bridges represented the state's only surviving cluster of such bridges.

It has been substantially replaced by a non-truss bridge, though the National Register listing has not yet been revoked.

It has been termed a "lost bridge" because the original structure was mostly replaced, as documented in a 2005 photo which showed trusses still in place, but the span supported by a concrete pillar construction which would not have been part of the original bridge. 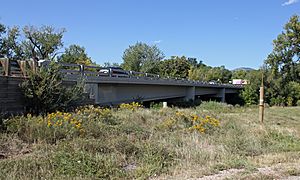 Bridge at site in 2012, with truss structure entirely gone

The Big Thompson River Bridge IV was a historic camelback pony truss bridge that was built in 1933.

All content from Kiddle encyclopedia articles (including the article images and facts) can be freely used under Attribution-ShareAlike license, unless stated otherwise. Cite this article:
Big Thompson River bridges Facts for Kids. Kiddle Encyclopedia.