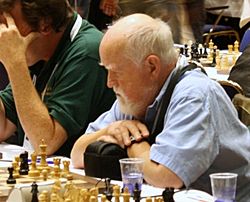 Hook at the Dresden Olympiad, 2008

During the preliminary rounds of the 1970 Siegen Olympiad, the Virgin Islands were paired with the USA team and Hook famously faced the legendary Bobby Fischer. Playing the black pieces, Hook ventured a pet line of the French Defence whereupon an exciting encounter developed, culminating in a stylish rook sacrifice by Fischer.

Hook authored a book as well as various magazine and newspaper articles about chess. In the art world, he is known for his one-man shows in painting and photography. He lived in Washington DC, with his wife Mimi, until his death on May 10, 2010.

All content from Kiddle encyclopedia articles (including the article images and facts) can be freely used under Attribution-ShareAlike license, unless stated otherwise. Cite this article:
Bill Hook Facts for Kids. Kiddle Encyclopedia.