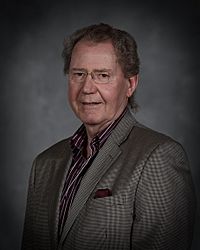 William Hunter McKnight, SOM PC (July 12, 1940 – October 4, 2019) was a Canadian politician. He was in the Canadian House of Commons from 1979 to 1993, and also was the Treaty Commissioner for the Province of Saskatchewan from 2007 through 2012. McKnight was born in Elrose, Saskatchewan. He was a member of the Progressive Conservative Party of Canada.

All content from Kiddle encyclopedia articles (including the article images and facts) can be freely used under Attribution-ShareAlike license, unless stated otherwise. Cite this article:
Bill McKnight Facts for Kids. Kiddle Encyclopedia.