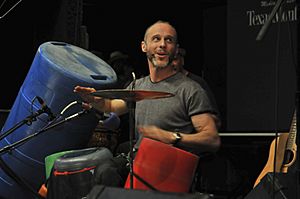 Jonas at the Kerrville Folk Festival in 2009

Billy Jonas of Asheville, North Carolina is a singer-songwriter, percussionist, and multi-instrumentalist. He works as both a general audience performer and family entertainer. He is a member of Congregation Beth HaTephila and a part of the Sacred Music Team. He is not related to the popular music band the Jonas Brothers. He trains students for their Bar Mitzvah or Bat Mitzvah which means son/daughter of commandment. As a founding member of the folk music duo, "The Billys," and leader of The Billy Jonas Band, Jonas uses recyclable items as instruments. His show focuses on enlightening audiences about each person’s inherent musical ability, and the musical potential of common “found objects.” Billy Jonas' 7 albums, PBS special, and 2 decades of live concerts have generated a following throughout North America.

His CD What Kind of Cat are You? received a First Place/Gold from the American Federation of Independent Musicians and a Parents' Choice Gold Award. Jonas' videos have garnered multiple accolades, including Parents' Choice Awards and a New York Times "Best for Kids" listing. In 2010 Billy Jonas and the Billy Jonas Band were invited to perform at the White House.

As a member of the duo "The Billys," he was featured at festivals and venues nationwide. Jonas shared stages with Patti Larkin, Ani DiFranco, David Wilcox, Richard Thompson, and Pete Seeger.

Billy conducts workshops that focus on a component of his music. These include {“foraged, found, and homemade instruments”, “songwriting”, “performance and presence”, “Neo-tribal hootenanny 101”, “teacher training”, and more.

All content from Kiddle encyclopedia articles (including the article images and facts) can be freely used under Attribution-ShareAlike license, unless stated otherwise. Cite this article:
Billy Jonas Facts for Kids. Kiddle Encyclopedia.