Bing is a British CGI-animated children's television series based on the books by Ted Dewan. It is broadcast on UK TV channel CBeebies; the series follows a pre-school bunny named Bing as he experiences the world around him. It uses small everyday occurrences to demonstrate how he learns new ways to manage situations with the help of his carer, Flop (voiced by Mark Rylance is series 1 and David Threlfall in series 2) and friends. The show is aimed at 2-6 year olds.

The 1st series of 78, eight minute episodes show the "mishaps, mess, energy and wonder of being a relatively new human being". The programme focuses on real-life situations experienced by many toddlers and their parents. At the end, Bing summarizes what he has learnt in the episode, with Flop intoning "It's a Bing thing". The second season began airing on Cbeebies on 31 October 2019. 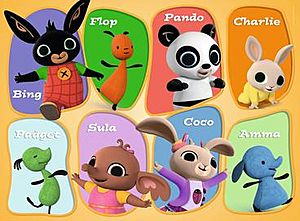 An image of the characters featured in Bing.

Bing was based on a series of books called "Bing Bunny" written and illustrated by Ted Dewan. Acamar Films acquired the rights to Bing Bunny and produced the program in conjunction with Brown Bag Films and Tandem Films. The series was developed for CBeebies though initial episodes were viewable at MIPTV.

HarperCollins Children's Books signed a deal with Acamar and The Licensing Company to re-publish the stories to link with the TV programme. The books were re-issued in 2013–14.

All content from Kiddle encyclopedia articles (including the article images and facts) can be freely used under Attribution-ShareAlike license, unless stated otherwise. Cite this article:
Bing (TV series) Facts for Kids. Kiddle Encyclopedia.