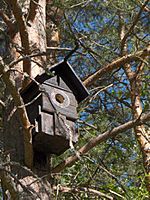 This birdbox is on a pine tree.

A birdbox is a human-made, usually wooden box used as a house for birds. It is suitable as a bird home because it is similar to a natural bird home, such as a hollow tree, and birds often make nests inside birdboxes. Birdboxes are often put on trees. They are often made by people who are fond of birds, but they are also useful for studying birds. For domesticated birds, birdboxes are often used for breeding.

Most birdboxes feature a simple design with of six planks ordered in a cube, with a hole in a wall where birds can go in and out. Common additions include a small stick outside the hole on which birds can sit on, and a sloping roof to make rainwater run off. Some can however be highly detailed and decorated, depending on the maker's preferences. They can also be made from things like logs or gourds. They come in many sizes, depending on the size of the bird type the box is made for. Most birdboxes are small, but some, such as ones made for owls or parrots, can be quite large.

Although birdboxes are intended for birds, many other animals can inhabit them as well. Examples include bees that make beehives inside them, and squirrels.

Nest boxes are usually wooden, although the purple martin will nest in metal. Some boxes are made from a mixture of wood and concrete, called woodcrete.

Nest boxes should be made from untreated wood with an overhanging, sloped roof, a recessed floor, drainage and ventilation holes, a way to access the interior for monitoring and cleaning, and have no outside perches which could assist predators. Boxes may either have an entrance hole or be open-fronted. Some nest boxes can be highly decorated and complex, sometimes mimicking human houses or other structures. They may also contain nest box cameras so that use of, and activity within, the box can be monitored.

The size of the nest box also affects the bird species likely to use the box. Very small boxes attract wrens and treecreepers and very large ones may attract ducks and owls. Seasonally removing old nest material and parasites is important if they are to be successfully re-used.

The material used in the construction may also be significant. Sparrows have been shown to prefer woodcrete boxes rather than wooden ones. Birds nesting in woodcrete sites had earlier clutches, a shorter incubation period, and more reproductive success, perhaps because the synthetic nests were warmer than their wooden counterparts.

Placement of the nest box obviously is also significant. Some birds (including birds of prey) prefer their nest box to be at an optimum height. Some birds (such as ducks) prefer nest sites them to be very low or even at ground level. For many birds orientation relative to the sun is of importance with many birds preferring an orientation away from direct sun and sheltered from the prevailing rain. 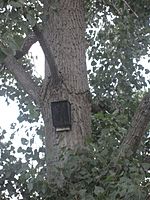 A typical bat house affixed to a tree trunk

Bat boxes differ from bird nest-boxes in typical design, with the larger opening on the underside of the box, and are more often referred to as bat boxes, although in regard to the rearing of young, they serve the same purpose. Some threatened bat species can be locally supported with the provision of appropriately placed bat-boxes, however species that roost in foliage or large cavities will not use bat boxes. Bat boxes are typically made out of wood, and there are several designs for boxes with single or multiple chambers. Directions for making the open bottom bat houses for small and large colonies, Colour and placement is important to ensuring that bat boxes are used; bat boxes that are too shaded will not heat up enough to attract a maternity colony of bats. Australian bat box projects have been running for over 12 years in particular at the Organ Pipes National Park. Currently there are 42 roost boxes using the "Stebbings Design" which have peaked at 280 bats roosting in them. The biggest problem with roosting boxes of any kind is the ongoing maintenance; problems include boxes falling down, wood deteriorating, and pests such as ants, the occasional rat, possums, and spiders.

Nest boxes are marketed not only for birds, but also for butterflies and other mammals, especially arboreal ones such as squirrels and opossums. Depending on the animal, these boxes are used for roosting, breeding, or both. Or, as in the case with butterflies, hibernation.

Wasps may build their nests inside a nest box intended for other animals, and may exclude the intended species.

All content from Kiddle encyclopedia articles (including the article images and facts) can be freely used under Attribution-ShareAlike license, unless stated otherwise. Cite this article:
Birdbox Facts for Kids. Kiddle Encyclopedia.