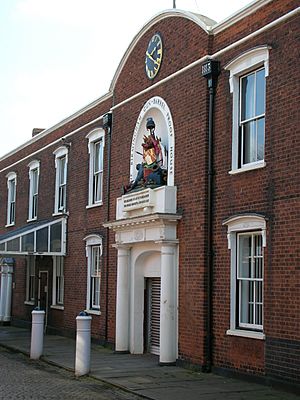 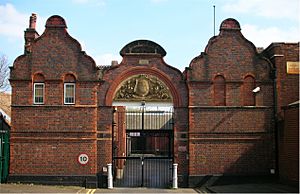 The Birmingham Gun Barrel Proof House is a weapons proofing establishment in Banbury Street, Birmingham, UK. The building was designed by John Horton and consists of a centre bay, emphasised by a segmental parapet, which contains trophies by William Hollins. A Jacobean-style gateway was added in 1883. It is a grade II* listed building.

The Proof House was established in 1813 by an act of Parliament at the request—and expense—of the then prosperous Birmingham Gun Trade. Its remit was to provide a testing and certification service for firearms in order to prove their quality of construction, particularly in terms of the resistance of barrels to explosion under firing conditions. Such testing prior to sale or transfer of firearms is made mandatory by the Gun Barrel Proof Act of 1868, which made it an offence to sell, offer for sale, transfer, export or pawn an unproofed firearm, with certain exceptions for military organisations.

The Proof process is that of testing a firearm for integrity using a severely overcharged cartridge, or Proof load which is fired through the gun in an armoured testing chamber. This exposes it to pressures far beyond what it would experience in normal service. It is awarded a stamped Proof Mark if it survives without either being destroyed or suffering damage from the proof load. Larger guns were tested at a shooting range in Bordesley along a railway viaduct; however, the expansion of the city centre resulted in the closure of the shooting range.

Proof may be rendered invalid if the firearm is damaged or modified significantly; at this point it is described as "out of proof" and must be re-proofed before it can be sold or transferred. Note that the correct term for a satisfactorily tested firearm is Proofed, and not Proven.

There are penalties for non-compliance with proof laws; a fine of £5,000 may be levied for selling an unproofed or out-of proof firearm, more if a number of firearms are involved in a transaction. Tampering with, or forging, a proof mark is regarded as even more serious.

The Proof House still exists today, largely unchanged in both purpose and construction, although it offers a wider range of services including ammunition testing and firearm accident investigation. The building contains a museum of arms and ammunition, and can be visited by prior arrangement.

All content from Kiddle encyclopedia articles (including the article images and facts) can be freely used under Attribution-ShareAlike license, unless stated otherwise. Cite this article:
Birmingham Proof House Facts for Kids. Kiddle Encyclopedia.