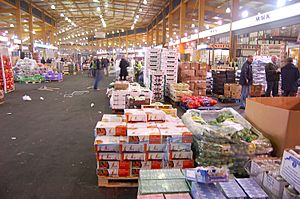 Birmingham's wholesale food markets date from 1166, when the Lord of the Manor Peter de Birmingham obtained a royal charter permitting him to hold a market at "his castle at Birmingham", though later members of the de Birmingham family claimed that markets in Birmingham had been held since before the Norman Conquest. It was this market that provided the first impetus to the growth of Birmingham as a commercial town from the twelfth century onwards. Until the nineteenth century the markets were held throughout the streets of the centre of the town: a cornmarket and Welsh and English markets selling cattle are recorded in 1553, with butchers shambles and a fish market recorded from the eighteenth century.

The organisation of the market was one of the main concerns of the Birmingham Street Commissioners following their establishment in 1769, with the body taking on responsibility for the collection of tolls in 1806 and buying the marketing rights outright from the Lord of the Manor in 1824, before handing responsibility to the Birmingham Corporation in 1854. In the early nineteenth century the clearance of buildings from the Bull Ring allowed the concentration of the markets on the site. In 1817 the Street Commissioners opened the Smithfield market on the site of the Birmingham Manor House, new wholesale fruit and vegetable markets opened on Moat Row in 1883, and the pig and cattle trades moved to a new market in Montague Street between 1892 and 1898. The wholesale fish market in Bell Street was opened in 1869 and extended in 1883, while in 1897 a new meat market with an attached slaughterhouse was opened in Bradford Street.

Increasing congestion in the markets area, coupled with the demolition of the Fish Market for the construction of the Bull Ring Centre in 1958 and the increasing inadequacy of the Smithfield and City Meat markets, led to post-war plans to develop a new wholesale market complex. The first phase of the market buildings opened in February 1974. the building comprised the largest integrated wholesale fresh produce market in the U.K. and the wholesale markets traded on that site until May 2018, when they moved to new purpose built premises at The Hub in Witton, Birmingham B6 7EU.

All content from Kiddle encyclopedia articles (including the article images and facts) can be freely used under Attribution-ShareAlike license, unless stated otherwise. Cite this article:
Birmingham Wholesale Markets Facts for Kids. Kiddle Encyclopedia.