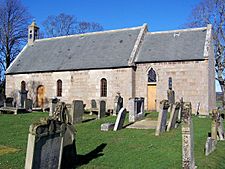 Birnie Kirk is a Church of Scotland church situated 4 km south of Elgin, in Moray. The church was built c. 1140 and became the first cathedral of the Bishop of Moray. It remained the cathedral church until 1184 when Bishop Simon de Tosny died. His successor Richard de Lincoln moved the seat to the church of Kinnedar. The church is one of the oldest in Scotland to have been in continuous use.

The nave was shortened by a few feet in 1734 but the remainder is the original 12th-century structure. The building is constructed of finely cut ashlar blocks. It is simply designed with a nave and a smaller chancel. The nave and chancel are partitioned by a striking Romanesque arch. A baptismal font, contemporary with the building, sits in the corner of the nave.

In the grounds stands a Class I Pictish symbol stone, attesting to the area's long history. The circular nature of the grave yard suggests that the church overlies an earlier, Dark Age site.

It was listed in 1971 as a category A building.

There is a legend that in November 1704 Sir Robert Gordon, known as the "Wizard of Gordonstoun", was pursued by the Devil as he rode towards Birnie Kirk. In the chase, Sir Robert was thrown over the churchyard wall, breaking his neck. Since he died on consecrated ground, the Devil could not claim his soul.

All content from Kiddle encyclopedia articles (including the article images and facts) can be freely used under Attribution-ShareAlike license, unless stated otherwise. Cite this article:
Birnie Kirk Facts for Kids. Kiddle Encyclopedia.