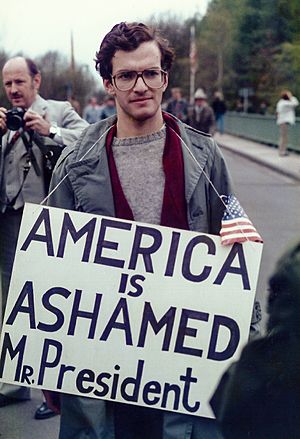 The Bitburg controversy involved a ceremonial visit by U.S. President Ronald Reagan to a German military cemetery in Bitburg, a town in extreme western Germany near the border with Luxembourg, in May 1985, designed to celebrate the end of World War II in Europe 40 years earlier.

The visit caused some controversy, both in the United States and around the world, when it became known that members of the Waffen-SS, the military arm of Nazi Germany's SS (Schutzstaffel), were also buried there. The entire SS was judged to be a criminal organisation at the Nuremberg trials. The fact that Reagan had not been scheduled to visit former Nazi concentration-camp sites compounded the controversy, and a trip to Bergen-Belsen concentration camp was later added to his itinerary.

On Sunday 5 May, Reagan and Kohl appeared at the Bergen-Belsen concentration camp. The U.S. President's speech there, according to Time, was a "skillful exercise in both the art of eulogy and political damage control." Reagan said:

All these children of God, under bleak and lifeless mounds, the plainness of which does not even hint at the unspeakable acts that created them. Here they lie, never to hope, never to pray, never to live, never to heal, never to laugh, never to cry.... And then, rising above all this cruelty, out of this tragic and nightmarish time, beyond the anguish, the pain and suffering, and for all time, we can and must pledge: never again.

Reagan responded about the controversy: "This visit has stirred many emotions in the American and German people too. Some old wounds have been reopened, and this I regret very much, because this should be a time of healing."

All content from Kiddle encyclopedia articles (including the article images and facts) can be freely used under Attribution-ShareAlike license, unless stated otherwise. Cite this article:
Bitburg controversy Facts for Kids. Kiddle Encyclopedia.