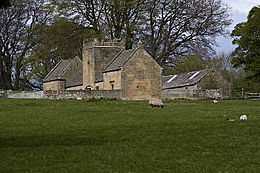 The three storied battlemented tower was built in the 15th century by the Middleton family who sold it to the Harbottles in 1502. Marjorie Harbottle the heiress to the Harbottle estate, married Sir John Fenwick of Fenwick Tower and in 1529 they conveyed the property to their second son Roger Fenwick. In 1622 Robert Fenwick built a new manor house adjoining the tower: a datestone inscribed 'RF 1622 JF' is incorporated into the building

The Fenwicks sold the estate in 1630 to Edward Grey, from whom it was sequestered in 1646. In 1680 it was acquired by Sir James Clavering and in 1802 the Claverings sold to Sir Charles Monck.

It was in a state of ruin by 1930 but has since been restored.

All content from Kiddle encyclopedia articles (including the article images and facts) can be freely used under Attribution-ShareAlike license, unless stated otherwise. Cite this article:
Bitchfield Tower Facts for Kids. Kiddle Encyclopedia.