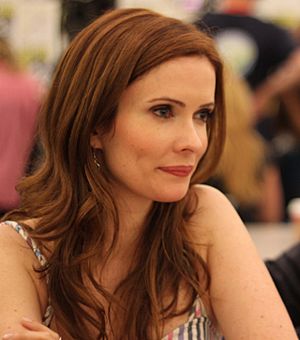 Elizabeth Tulloch (born January 19, 1981) is an American actress. She acts in movies and television programs. She starred as Jackie in the independent movie Caroline and Jackie. Tulloch also played as Nadine in Lakeview Terrace, a crime movie from 2009. She plays Juliet in Grimm.

Tulloch was born in San Diego. She grew up in Spain and South America.

All content from Kiddle encyclopedia articles (including the article images and facts) can be freely used under Attribution-ShareAlike license, unless stated otherwise. Cite this article:
Bitsie Tulloch Facts for Kids. Kiddle Encyclopedia.