The Black-legged Dart Frog (Phyllobates bicolor), also known as the bicolored dart frog or Neari in Choco, is the second most toxic of the wild poison dart frogs. 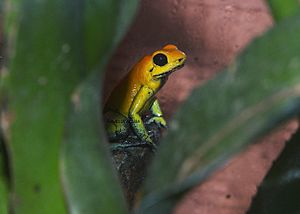 Phyllobates bicolor is one of the largest poison dart frogs. Males can reach a length of 45–50 mm from snout to vent, while the slightly larger females reach 50–55 mm in length from snout to vent. P bicolor ranges in color from earthy orange to pure yellow in coloration, often with a blue or black tinge on their legs, hence their name. They are smaller and more slender than their close relative, Phyllobates terribilis, and can resemble juvenile or subadult P. terribilis frogs. They also bear a resemblance to D. leucomelas, particularly the "netted" color morph of D. leucomelas.

While its toxicity is weaker than P. terribilis, P. bicolor is still a highly toxic animal, one of the few frogs confirmed to have caused human fatalities. Just 150 micrograms of its poison is enough to kill an adult human. This frog is often heated over a flame to make it "sweat" the liquid poison for hunting darts. The poison causes death by respiratory and muscular paralysis. Research is being conducted to determine medicinal uses for this batrachotoxin. As with all dart frogs, captive-raised individuals are not toxic; the animals require chemicals found only in their wild food sources, mainly insects. In captivity, these chemicals are not available to them from their food sources. 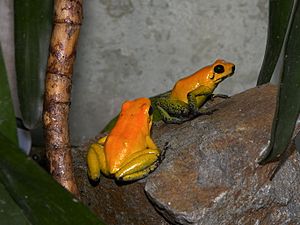 P. bicolor can sometimes be kept in groups in captivity.

Like many of the Phyllobates genus, P. bicolor is mostly terrestrial, only taking to the trees when rearing young. Most are solitary animals, however wild groups can be found occasionally. Unlike many frog species, both males and females can be vocal, producing high-pitched, bird-like calls. The black-legged poison dart frog is mostly diurnal, retreating into the cover of the leaf litter at night. While most individuals are solitary, during the wet season, P. bicolor frogs, like all dendrobatids, gather in large breeding groups. One of the more dedicated of parents among anurans, P. bicolor males carry their tadpoles on their backs. The tadpoles stick to the mucus on the backs of their fathers, and are transported to puddles. There they are fed and protected until they become froglets, at which point they are completely independent, and leave to begin their adult lives.

All content from Kiddle encyclopedia articles (including the article images and facts) can be freely used under Attribution-ShareAlike license, unless stated otherwise. Cite this article:
Black-legged Dart Frog Facts for Kids. Kiddle Encyclopedia.