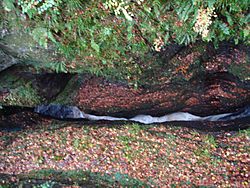 The Black Rock Gorge, on the Allt Graad, viewed from the top.

Black Rock Gorge is a deep and narrow cleft in Old Red Sandstone conglomerate through which the Allt Graad (also known as the 'River Glass') flows in Easter Ross, Scotland. It was caused by rapids heavily burdened with sediment being carried upwards as part of the great Post-glacial rebound.

It lies a few kilometres from Evanton, at the edge of the Evanton Wood in the traditional territory of the Clan Munro. The Black Rock Gorge is approximately 1.5km in length as shown on 1:50 000 Ordnance Survey mapping and reaches 36 metres (120 feet) in depth. It attracts a substantial amount of tourism, and there is a camping site nearby.

The gorge is the subject of local Gaelic myth, in which a local noblewoman, the Lady of Balconie, is lured into its depths by a mysterious man, thought to be the Devil. Ever since, it is said, the cries which she utters can be heard from the top.

In April 2004, ten days of filming took place in the area for the movie Harry Potter and the Goblet of Fire and the gorge is the setting for one scene. Also James Robertson's award-winning novel The Testament of Gideon Mack is inspired by Black Rock Gorge.

All content from Kiddle encyclopedia articles (including the article images and facts) can be freely used under Attribution-ShareAlike license, unless stated otherwise. Cite this article:
Black Rock Gorge Facts for Kids. Kiddle Encyclopedia.