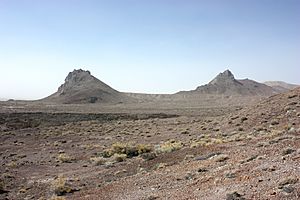 In December 2009, the Bureau of Land Management announced a roundup of 2500 wild horses out of an estimated population of 3000 in the Black Rock Range and vicinity, due to overpopulation.

All content from Kiddle encyclopedia articles (including the article images and facts) can be freely used under Attribution-ShareAlike license, unless stated otherwise. Cite this article:
Black Rock Range Facts for Kids. Kiddle Encyclopedia.