Kids Encyclopedia Facts
Not to be confused with Black Rocks (South Georgia). 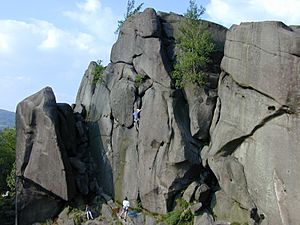 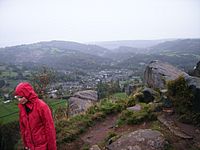 View From The Top

The Black Rocks is a small outcrop of natural gritstone, between Cromford and Wirksworth in the Derbyshire Peak District, England. Parking is available for walking along the old railway path (see Cromford and High Peak Railway) and up to the top of the crag, and there is a picnic area.

The area has been a well-known rock climbing venue since the 1890s. Many hard lines were put up by some of the best climbers of the 1980s and 1990s. The two best-known climbs are featured in the documentary Hard Grit. These are Gaia (climbing grade E8 6b), up the groove in the massive nose that one sees first on the walk to the top, and Meshuga (grade E9 6c), on the main overhanging Promontory. The first ascent of the former was made in 1986 by British climber Johnny Dawes.

The Black Rocks also has easier climbing, but this is not for the faint of heart; larger crags offer a far better selection of similar climbs. There are also short but well-worn 'boulder problems' such as the 'Railway Slab'.

All content from Kiddle encyclopedia articles (including the article images and facts) can be freely used under Attribution-ShareAlike license, unless stated otherwise. Cite this article:
Black Rocks (Derbyshire) Facts for Kids. Kiddle Encyclopedia.