The blackcheek moray eel is widespread throughout the tropical waters of the Indo-Pacific area from eastern coast of Africa until oceanic islands from the Pacific Ocean like Polynesia but not Hawaii. It is a very common moray on the Maldives reefs.

This moray eel occurs in clear seaward reefs of oceanic islands, especially in porous coral rock and in reef walls and steep slopes with holes. It likes reefs composed of rubble and debris of dead coral in which it finds its shelter, often on the outer slopes between 4 and 40 meters deep. 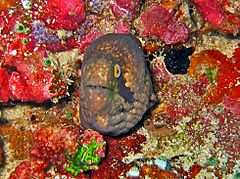 The blackcheek moray is rather solitary and very territorial, it is likely to bite any foreign body entering its vigilance area.

It also lives in association with cleaner shrimps and the Anthias. It feeds on fish and octopuses at night, when it comes out of its lair.

All content from Kiddle encyclopedia articles (including the article images and facts) can be freely used under Attribution-ShareAlike license, unless stated otherwise. Cite this article:
Blackcheek moray eel Facts for Kids. Kiddle Encyclopedia.