Blackstone River is a medium-sized river originating in the front ranges of the Canadian Rockies. It is a tributary of the Brazeau River, which in turn flows into the North Saskatchewan River.

The Blackstone forms at the base of a geological feature known as the Tarpeian Rock, just outside the southern boundary of Jasper National Park. 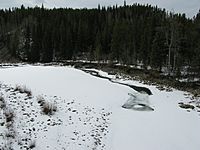 The Blackstone River from Alberta Highway 40

Members of the Palliser Expedition discovered this river in the late 1850s. It was named the South Brazeau River after one of the expedition members, Joseph Brazeau of St. Louis.

Later, the river was renamed the Blackstone.

(from headwaters to the Brazeau River)

All content from Kiddle encyclopedia articles (including the article images and facts) can be freely used under Attribution-ShareAlike license, unless stated otherwise. Cite this article:
Blackstone River (Alberta) Facts for Kids. Kiddle Encyclopedia.