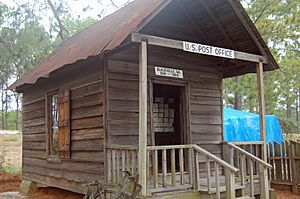 Blacksville is an unincorporated community in Henry County, Georgia, United States. At the 2000 census it was recorded as a census-designated place (CDP), with a population of four. It was no longer a CDP at the 2010 census.

Blacksville is named after the local demographics of McDonough, Georgia, during the era of legal segregation. McDonough is where whites lived; Blacksville is the adjacent area where blacks lived. Blacksville grew next to, but on the "wrong side", of the railroad tracks. The segregation-era black high school for Henry County, Georgia, was in Blacksville and is now used as Henry County Middle School. Most of the community was subsequently annexed by nearby McDonough.

According to the United States Census Bureau, the CDP had a total area of 0.1 square miles (0.26 km2), all of it land.

All content from Kiddle encyclopedia articles (including the article images and facts) can be freely used under Attribution-ShareAlike license, unless stated otherwise. Cite this article:
Blacksville, Georgia Facts for Kids. Kiddle Encyclopedia.