Blagoevgrad Province is a province (oblast) of southwestern Bulgaria. The administrative centre is Blagoevgrad.

There are several mountains, or parts of mountains, in the province. These are Rila, Pirin, the Rhodopes, Slavyanka, Belasitsa, Vlahina, Maleshevo, Ograzhden and Stargach. There are two major rivers, Struma River and Mesta River. 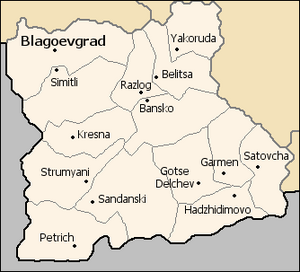 Map of Blagoevgrad Province showing the municipal subdivisions and centres

The Blagoevgrad province has 14 municipalities. The following table shows the names of each municipality, the main town (in bold) or village, and the population of each as of 2011.

All content from Kiddle encyclopedia articles (including the article images and facts) can be freely used under Attribution-ShareAlike license, unless stated otherwise. Cite this article:
Blagoevgrad Province Facts for Kids. Kiddle Encyclopedia.