Edelweiss is a well-known Europe mountain flower. The scientific name is a latinisation of the Greek leontopódion, "lion's paw."

Leaves and flowers are covered with white hairs and look woolly. Each Edelweiss bloom has five to six small yellow flower heads surrounded by leaflets in a star shape. The flowers are in bloom between July and September.

The plant's leaves and flowers are covered with white hairs, and appear woolly (tomentose). Flowering stalks of edelweiss can grow to a size of 3–20 centimetres (1–8 in) in the wild, or, up to 40 cm (16 in) in cultivation. Each bloom consists of five to six small yellow clustered spikelet-florets (5 mm, 0.20 in) surrounded by fuzzy white "petals" (technically, bracts) in a double-star formation. The flowers bloom between July and September.

Leontopodium nivale is considered a least concern species by the IUCN. The population of this species declined due to overcollection, but is now protected by laws, ex situ conservation and occurrence in national parks.

Leontopodium nivale is grown in gardens for its interesting inflorescence and silver foliage. The plants are short lived and can be grown from seed.

Compounds of different classes, such as terpenoids, phenylpropanoids, fatty acids and polyacetylenes are reported in various parts of edelweiss. Leoligin was reported as the major lignan constituent. 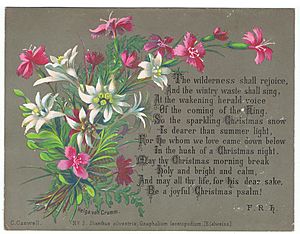 In the 19th century, the edelweiss became a symbol of the rugged purity of the Alpine region and of its native inhabitants.

In Berthold Auerbach's novel Edelweiss (1861), the difficulty for an alpinist to acquire an edelweiss flower was exaggerated to the point of claiming: "the possession of one is a proof of unusual daring." This idea at the time was becoming part of the popular mythology of early alpinism. Auerbach's novel appeared in English translation in 1869, prefaced with a quote attributed to Ralph Waldo Emerson,

"There is a flower known to botanists, one of the same genus with our summer plant called 'Life-Everlasting', a Gnaphalium like that, which grows on the most inaccessible cliffs of the Tyrolese mountains, where the chamois dare hardly venture, and which the hunter, tempted by its beauty and by his love (for it is immensely valued by the Swiss maidens), climbmivas the cliffs to gather, and is sometimes found dead at the foot, with the flower in his hand. It is called by botanists the Gnaphalium leontopodium, but by the Swiss EDELWEISS, which signifies NOBLE PURITY."

All content from Kiddle encyclopedia articles (including the article images and facts) can be freely used under Attribution-ShareAlike license, unless stated otherwise. Cite this article:
Edelweiss Facts for Kids. Kiddle Encyclopedia.