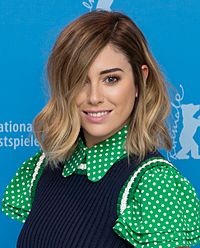 Blanca Martínez Suárez (born 21 October 1988), professionally known as Blanca Suárez, is a Spanish actress and model. She was born in Madrid. She is best known for her roles on television series The Boarding School (2007–10), The Boat (2011–13), and the Netflix series Cable Girls (2017–present).

All content from Kiddle encyclopedia articles (including the article images and facts) can be freely used under Attribution-ShareAlike license, unless stated otherwise. Cite this article:
Blanca Suárez Facts for Kids. Kiddle Encyclopedia.