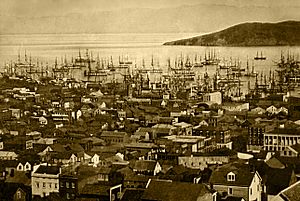 Blossom Rock was a serious navigational hazard to sailing ships entering or leaving San Francisco Bay in the 19th century. It was formally reported by Captain F. Beechey of the Royal Navy ship HMS Blossom in 1827.

The rock, named in honor of Beechey's ship, was located about halfway between Alcatraz Island and Yerba Buena Island, and about 1,000 yards (0.91 km) off the Port of San Francisco., p. 5. It was normally submerged about 5 feet (1.5 m) below mean low tide, so would not have been visible to the ship's captain or crew. Captain Beechey explained how sailors could avoid striking the rock by using two particularly prominent giant redwood trees on the east shore of the Bay to determine the exact location of their ships with respect to the rock.

After the Navigation Trees were cut down in the early 1850s, sailors no longer had an easy way to identify the location of Blossom Rock. There were repeated attempts to mark it with buoys, but those were swept away by the strong currents of the bay. In 1870, a group of US military engineers, led by Robert S. Williamson, developed a procedure to remove enough of the rock to eliminate it as a navigational hazard.

Discovery of the Rock 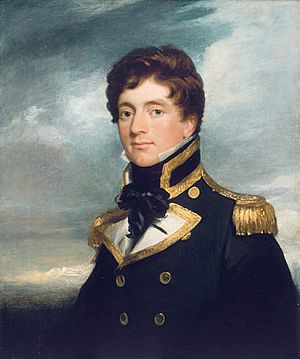 In 1827, Royal Navy Captain Frederick William Beechey (1796–1856) of HMS Blossom was exploring the channel in San Francisco Bay between the Golden Gate and the Port of San Francisco, California, when he discovered an uncharted obstacle at a point about halfway between Alcatraz Island and Yerba Buena Island, and about 1,000 yards (0.91 km) off the Port of San Francisco. He determined that the obstacle was a very large rock, which was too massive to remove with the available technologies. He named the submerged object "Blossom Rock."

During the 1700s, when Europeans first came to the Oakland Hills area, the eastern coast of San Francisco Bay contained huge forests of old growth giant redwood trees, extending inland from the hills to areas now known as Moraga and Lafayette, California. These original trees were still present during the early 1840s.

Captain Beechy also observed that two trees on the hills were even more prominent than their neighbors, and that sailors could use them as reference points to determine the exact location of the submerged Blossom Rock. Thereafter, the two trees were known as the "Navigation Trees", because they helped prevent ships from striking the rock. This location is marked by California Historical Landmark #962, "Blossom Rock Navigation Trees."

Widespread logging of the old growth forest began about 1840, and by 1860 practically none of the old redwoods remained visible from the bay. The Navigation Trees were reportedly cut down after 1851 and before 1854, nullifying this method of warning ships about the location of Blossom Rock. The American navy tried several times to place buoys around the rock, but each time, rough seas in the bay swept away the buoys. Loss of the redwood trees created such a navigational problem that the Corps of Engineers was tasked to remove the obstacle.

In 1984, the site of the Navigation Trees was named a historical landmark by the state of California. A plaque marks the location and there are trees currently growing in the area that are sprouts from the original trees' stumps. 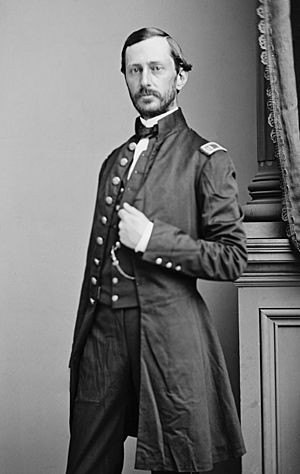 Initial attempts to blast the rocks

In December, 1866, Col. Robert Williamson of the U. S. Army Corps. Engineers decided to blast the rock down to a safe level. He requested U. S. Coast Survey Assistant Edward Cordell to make surveys before and after each blast. The superintendent of the U.S. Coast Survey, Erasmus Hilgard, gave Cordell permission, so long as it didn't interfere with his other work. That was no problem, since the floodwaters in the Sacramento and San Joaquin Rivers were too high to carry out surveys there at the time.

On Jan. 14,1867, Cordell moved his survey schooner "Marcy" and crew from their usual stand at Meig's Wharf to anchorage off Blossom Rock, and began sounding the area using the small boat. Apparently they were finished before the blasters were ready, since on Jan. 17 he resumed observations of the currents in San Francisco Bay, following the drifting floats in the small boat.

By Jan. 30, all was ready, and at 9:00 AM the first blast was set off. It made no discernable difference in the depths. A second blast was set off the next morning, with the same result. All during February they set off blasts, waited while Cordell's crew measured the depths, then set off the next. After the 6th and 7th blasts on Feb. 26, Cordell gave up and returned to Meig's Wharf. There had been no change in the depth of the water over the rock.

However, at Williamson's request, Cordell continued work on Blossom rock. Another blast took place on March 4, one on March 5, two on March 6, and the last on March 7. Altogether they had blasted it a dozen times. The results were not spectacular, and since their charges were exhausted, they replaced the buoy and abandoned the effort.

Major R. S. Williamson and Lieutenant W. H. Heuer were put in charge of the Blossom Rock removal project in 1870. Their first task was to make accurate measurements of the rock, which no one had yet been able to do, then to perform experiments to determine the weight of explosive needed to accomplish the goal. They wrote that the top was 5 feet (1.5 m) below water at mean low tide. At a depth of 24 feet (7.3 m), the rock's length was 125 feet (38 m) and its width was 105 feet (32 m). The desired end was to clear the channel to a depth of 24 feet (7.3 m) below mean low tide.

The removal team prepared three charges of gunpowder, weighing 75, 125 and 175 pounds, respectively. They sealed each charge in a water-tight wooden cask that had a hole bored in its top for passing the wire that would detonate a cartridge, which had been placed as close to the center of the charge as possible. Each cask was then wrapped in a tight-fitting sack of sailcloth, and covered with tar. Two pieces of iron would be tied to each cask (one on each side of the cask) to prevent the tide from washing the assembly off the rock.

The first blasting experiment occurred on January 29. A 75-pound charge was exploded when the rock was covered by 16 feet (4.9 m) of water. The rock was "shattered", but no large pieces were broken off.

The second experiment was performed on the next day, using a 175-pound explosive charge under 11 feet (3.4 m) of water. After the blast, there was no noticeable increase in water depth (which would have occurred if a significant chunk of rock had been blown off the top). This time, a diver was sent down to make a close-up inspection ("... in armor.") The diver found several breaks and jagged places in the rock, but no increase in water depth. The diver brought up several rock samples for further examination.

The third experiment was performed on February 9, using a 175-pound explosive charge under 14 feet (4.3 m) of water. The explosion threw a plume of water to a height of 40 feet (12 m) in the air. After-action inspection showed that about 11 cubic yards (8.4 m3) had been removed from the original rock.

The fourth experiment, on February 19, employed two successive blasts, each using a 125-pound charge under 20 feet (6.1 m) of water. It removed 15 cubic yards (11 m3) of material from Blossom Rock.

The fifth test, on February 20, used two 125-pound charges in successive explosions, one under 18 feet (5.5 m) and the other under 21 feet (6.4 m) of water, but removed only 3 cubic yards (2.3 m3) of stone. The authors stated that they believed the charges had been placed on loose rock accumulated from previous tests, and did not cause as much damage as if they had been placed on a solid stone surface.

The sixth test, performed March 4–5, used two 75-pound charges under 21 feet (6.4 m) of water. The only comment was that very little damage was done to the rock.

The eighth test, performed March 7, exploded the remaining 175-pound charge under 13 feet (4.0 m) of water, removed 8.5 cubic yards (6.5 m3) of stone. The authors noted that the blast threw up a column of water that was about 50 feet (15 m) high and about the same in diameter.

The first two observations led the team to believe that it would be better to initially drill into the rock, then place the charge at the bottom of the hole before detonating.

Sometime after Williamson and his crew finished their work, Blossom Rock was removed to a depth of 21 feet (6.4 m) below mean low tide. Evidently, a decision was made to remove more of the rock. The Chief Engineer of the U.S. Army reported in 1903 that Blossom Rock was further removed from 24 to 30 feet (9.1 m) in depth by December 27, 1903.

In 1974, the San Francisco office of the Corps of Engineers reported that Blossom Rock, as well as several other rock pinnacles in San Francisco Bay, had been removed to a depth of 40 feet (12 m) below mean low tide, as part of a project to widen and deepen the channel into the Port of San Francisco.

All content from Kiddle encyclopedia articles (including the article images and facts) can be freely used under Attribution-ShareAlike license, unless stated otherwise. Cite this article:
Blossom Rock (San Francisco Bay) Facts for Kids. Kiddle Encyclopedia.