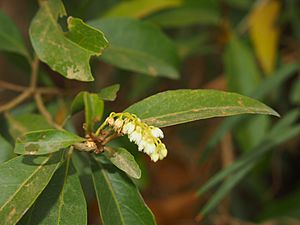 Elaeocarpus grandis, commonly known as blue quandong, blue fig or silver quandong, is species of flowering plant in the family Elaeocarpaceae and is endemic to eastern Australia. It is a large tree with buttress roots at the base of the trunk, oblong to elliptic leaves with small teeth on the edges, racemes of greenish-white flowers and more or less spherical blue fruit.

Elaeocarpus grandis was first formally described in 1860 by Ferdinand von Mueller in his book Fragmenta Phytographiae Australiae from material collected on the banks of the Pine River.

The name Elaeocarpus grandis is accepted by the Australian Plant Census. Plants of the World Online considers E. grandis to be a synonym of E. angustifolius, but does not include Australia in the distribution of that species.

Blue quandong grows in rainforest and along moist, scrubby watercourse from Cooktown in far north Queensland to the Nambucca River in northern New South Wales, at altitudes up to 1,100 m (3,600 ft).

The fruit of E. grandis is attractive to birds, including the Australian brushturkey and southern cassowary and the flying foxes (genus Pteropus).

Indigenous Australians ate the fruit raw or buried the unripe fruit in sand for four days making it sweet and more palatable. Early settlers used the fruit for jams, pies and pickles.

In the colonial period, the timber was used for furniture, construction and for racing sculls and oars. Aboriginal people used the stones to make necklaces.

All content from Kiddle encyclopedia articles (including the article images and facts) can be freely used under Attribution-ShareAlike license, unless stated otherwise. Cite this article:
Blue quandong Facts for Kids. Kiddle Encyclopedia.