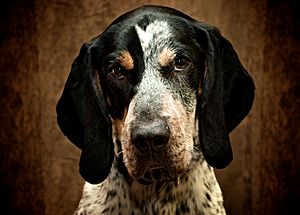 A head shot of a Bluetick Coonhound, showing tan muzzle and blueticked blaze.

The overall build of the Bluetick Coonhound is muscular and speedy. The head is carried up and the tail carried over the back, without signs of fear or nervousness. The Bluetick coat should be moderately coarse and glossy. The Bluetick Coonhound gets its "blue" coloring from black ticking on a white background, which gives the impression of a navy blue color. This ticking covers the body and can be interspersed with variously-shaped black spots on the back, ears and sides. Preference runs to more blue than black on the body. Black should predominate on the head and ears. Bluetick Coonhounds can come either with or without markings. With markings means they will have brown markings above the eyes, along both sides of the muzzle, on the chest, and down all of the legs. Without markings means their color consists of only black and white fur. There is generally a ticked blaze running up the face. Bluetick Coonhounds should be 21 inches to 27 inches tall at the shoulder and males weigh approximately 55 to 80 pounds (25 to 36 kg). Females are considerably smaller at an average weight of 45 to 65 pounds. Feet should be cat-like, rounded with well-arched toes. Their paws are larger than those of nearly all other breeds of dogs. Rear legs should have a moderate bend at the hocks. All legs should be straight from the dog's body to the ground when viewed from the front or rear.

Gascon blues are larger than standard Blueticks, with males a minimum of 27 inches and a maximum of 30 inches, per the American Blue Gascon Hound Association's breed standard.

Bluetick Coonhounds are bred to be hunting dogs. They are athletic, hardy, and need a full-time job or activity such as hunting, obedience, or agility to stay happy. They can be challenging to train and they should be monitored around cats or other small animals. They are, like their hound counterparts, a very intelligent breed that has the uncanny talent for problem-solving.

Once trained, the members of the breed are very mindful of their owner. Something first time pet owners should be aware of is the daunting task of "voice-training" these dogs. Being bred to bay while hunting, they are highly vocal. If properly socialized from a young age, they can be family pets. In normal conditions, the Bluetick Coonhound gets along well with children. They are mindful and friendly dogs. However, their noses will keep them in trouble, so food and garbage should never be left out unattended. The breed is often mistaken for being aggressive as the breed will "greet" strangers with its signature howl and will sniff the subject until satisfied. Usually, this is just the way the breed gets to know its subjects. Since Blueticks are driven by their strong sense of smell, they make excellent hunting/tracking dogs. If allowed, they will tree almost any animal smaller than them. Blueticks are generally easier to handle in the field than some other coonhounds.

The Bluetick Coonhound, which originated in Louisiana, was developed from the Grand Bleu de Gascogne hound of southwestern France, as well as the English Foxhound, the cur dog, the American Foxhound, and the Black and Tan Virginia Foxhound. Originally, Bluetick Coonhounds were registered in the United Kennel Club under the English Foxhound and Coonhound, but were recognized by the club as a separate breed in 1946. Bluetick Coonhounds are also recognized by the Australian National Kennel Council and the New Zealand Kennel Club. In April 2009, the breed was accepted by the American Kennel Club and in December 2009 they became eligible to compete in AKC coonhound events.

All content from Kiddle encyclopedia articles (including the article images and facts) can be freely used under Attribution-ShareAlike license, unless stated otherwise. Cite this article:
Bluetick Coonhound Facts for Kids. Kiddle Encyclopedia.