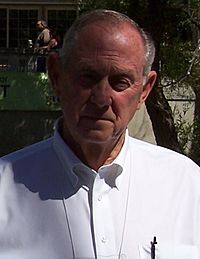 Cashell was born in Longview, Texas. He was married to Nancy Parker from 1964 until his death in 2020. The couple had four children.

Cashell died of an illness and heart disease-related problems on February 11, 2020 in Reno. He was 81.

All content from Kiddle encyclopedia articles (including the article images and facts) can be freely used under Attribution-ShareAlike license, unless stated otherwise. Cite this article:
Bob Cashell Facts for Kids. Kiddle Encyclopedia.