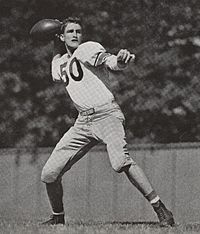 Robert Alonzo "Bob" DeMoss (January 27, 1927 – July 23, 2017) was an American football player, coach, and college athletics administrator. He served as the head football coach at Purdue University from 1970 to 1972, compiling a career college football record of 13–18. He was born in Dayton, Kentucky.

DeMoss played football as a quarterback at Purdue from 1945 to 1948. He was then selected in the second round of the 1949 NFL Draft by the New York Bulldogs, from whom he played in 1949.

All content from Kiddle encyclopedia articles (including the article images and facts) can be freely used under Attribution-ShareAlike license, unless stated otherwise. Cite this article:
Bob DeMoss Facts for Kids. Kiddle Encyclopedia.