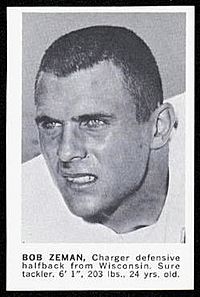 Edward Robert Zeman (February 22, 1937 – May 8, 2019) was an American football player and coach. He played as a defensive back. He played six seasons in the American Football League (AFL) from 1960 to 1966. He played for the Los Angeles Chargers/San Diego Chargers and Denver Broncos. He later had coaching roles at the Oakland Raiders, Denver Broncos, Buffalo Bills and the San Francisco 49ers. He was born in Geneva, Illinois.

All content from Kiddle encyclopedia articles (including the article images and facts) can be freely used under Attribution-ShareAlike license, unless stated otherwise. Cite this article:
Bob Zeman Facts for Kids. Kiddle Encyclopedia.