Bobby Benson and the B-Bar-B Riders facts for kids

Kids Encyclopedia Facts
This page is about the American cowboy radio program. For the Nigerian musician, see Bobby Benson.

Bobby Benson was created by Herbert C. Rice, who had already originated "dozens of local drama series" as a director at a radio station in Buffalo, New York. In 1932, representatives of the Hecker H-O Company of Buffalo sought to develop a children's radio program for the company's cereal products. Rice associated the "H-O" name with a cattle brand and soon developed a concept about an orphan named Bobby Benson and his guardian, Sunny Jim (an icon used to represent H-O cereals). The program was called The H-Bar-O Rangers while it was sponsored by Hecker.

After his parents' deaths, 12-year-old Bobby Benson inherited the B-Bar-B Ranch in Big Bend, Texas. That development paved the way for adventures as, week after week, outlaws and other bad people tried to cause problems for the ranch and its people. Young Bobby was helped by Tex Mason, his foreman. Jim Cox, in his book Radio Crime Fighters: More Than 300 Programs from the Golden Age, described the program as

capturing the imagination of little tykes and older adolescents as Bobby and his ranch hands stumbled upon exploits well beyond an ordinary youngster's reach. Most of Benson's escapades involved the pursuit and capture of contingents of bandits and desperadoes of diverse sorts. Rustlers, smugglers, bank and stagecoach robbers dotted the scripts like cactus spread across the Western plains.

Relief from the show's drama and suspense came in the form of songs sung around a campfire and humorous tall tales told by handyman Windy Wales. In a column in the May 15, 1938, issue of the trade publication Broadcasting, writer Pete Dixon noted that inclusion of comedy segments boosted the show's popularity: "Bobby Benson & the H-Bar-O Rangers was just another juvenile western until ... comedy characters were introduced in the script. Comedy situations were alternated with melodrama. Within a year the Bobby Benson show jumped from tenth place among juvenile favorites to first place. Comedy accounted for the climb."

In 1949, a reviewer for the trade publication Billboard wrote, "Kids still go for good old-fashioned Western adventure, and this show is loaded with fast action and fancy gun play, yet wholesome enough to please the most exacting parent."

The program was set in the modern West, with devices like automobiles and airplanes in addition to horses.

From 1932 to 1936, episodes were 15 minutes long and varied in frequency from two to five times a week. From 1949 to 1955, episodes were 30 minutes long, airing three to five times per week. In 1949, Rice (who had become production manager for Mutual) explained the reason for lengthening episodes: "Here we have taken a show that was a highly successful 15 minute strip back in 1932. It ran for five years commercially and sold a lot of cereal. We have modernized it into a half hour complete feature story. We recognize that "cliffhangers" for boys and girls are outdated. We know our juvenile audience has been conditioned to expect a well-constructed thirty minute drama."

Characters in Bobby Benson and the B-Bar-B Riders and the actors who portrayed them are shown in the table below.

Source: Radio Crime Fighters: More Than 300 Programs from the Golden Age except as noted.

The cast listed above staffed the main production on the East Coast, first in Buffalo, New York, (originating at WGR radio) and later in New York City. Meanwhile, in 1933, a separate production began in Los Angeles for audiences on the West Coast; its cast included George Breakston as Bobby, Jean Darling as Polly, Lawrence Honeyman as Black Bart and Muriel Reynolds as Aunt Lilly.

A spinoff of the program began in 1951 when a chewing gum manufacturer wanted to sponsor a program but couldn't afford much time on the air. The result was Songs of the B-Bar-B, a five-minute show with a tall tale sandwiched between two songs. 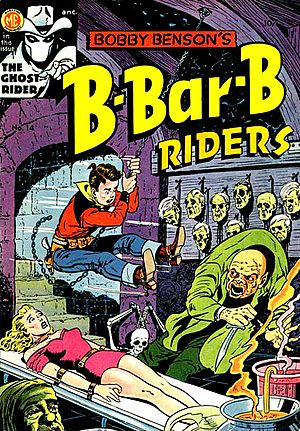 In 1950, Magazine Enterprises began publishing Bobby Benson's B-Bar-B Riders, a comic book adaptation of the radio program. As time went on, the Lemonade Kid and Ghost Rider were incorporated into the storylines.

After Bobby Benson and the B-Bar-B Riders was canceled in 1936, the Hecker H-O Company continued to promote the concept of "The Cowboy Kid" via advertisements in the form of comic strips that were printed in newspapers in the northeastern United States.

On April 18, 1950, WOR-TV in New York City began a 30-minute television version of the program. Two mainstays from the radio broadcast, Herb Rice and Pete Dixon, worked on the TV show as producer and writer, respectively. A second TV version in the 1950s "featured a greatly reduced cast."

In 1950, Mutual licensed the merchandising rights for Bobby Benson items, the first time the network had done so for any program. Jerry Sanford & Company had plans to sell 15 items related to the show "including cowboy hats and shirts, record albums, sweat shirts, gun holsters, various clothing accessories, and a comic book." By May 1950, more than 300 department stores in the United States carried Benson-related items. Sales from March to May totaled more than $300,000 — part of which went to Mutual as royalties.

In 1951, Palisades Park in New Jersey entered into an agreement to renovate its 16-ride "kiddieland" area "to resemble a ranch and corral setting." An article in Billboard said, "Benson's name and B-Bar-B Ranch will be plugged extensively thru special billing and other media." Kraft Caramels, which sponsored the program, prepared a merchandising program for selling candy in the park and prepared promotional material to be displayed at candy dealers' stores. The contract also called for personal appearances by the actor portraying Benson on the air.

In the spring of 1950, a tour by the actor portraying Benson included appearances in Paterson, New Jersey; Richmond, Virginia; and Wilkes Barre, Pennsylvania; with an appearance at the Ringling Bros. Barnum and Bailey Circus at Madison Square Garden as the highlight of the tour. A live production based on the show toured in the early 1950s. A story in the October 6, 1951, issue of Billboard reported on the Shrine Show scheduled for December 8–9, 1951, in Miami, Florida. "First attraction signed," it said, "was Bobby Benson, kid star of the Mutual Broadcasting Company's (MBS) B-Bar-B stanza. The show will run two and one -half hours."

All content from Kiddle encyclopedia articles (including the article images and facts) can be freely used under Attribution-ShareAlike license, unless stated otherwise. Cite this article:
Bobby Benson and the B-Bar-B Riders Facts for Kids. Kiddle Encyclopedia.