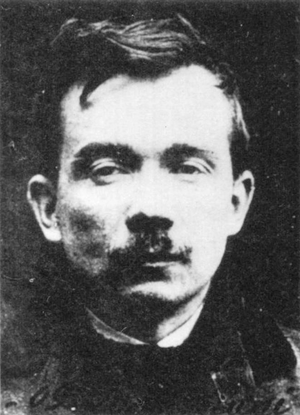 The Bonnot Gang was a group of French anarchists known for robbing banks. They were credited with being the first to use the getaway car. They also used repeating rifles, which not even the police had. Their crimes were violent - murder, bank robbery and auto theft. They were known for their belief in illegalism, a school of anarchism that promotes crime. The reasoning was the state had no legitimate authority so they could break any laws they wished. The gang was named after its leader, Jules Bonnot. They were very famous at the time (1911-1912) and have been made into legends through books, television, movies, etc. throughout France and other countries.

All content from Kiddle encyclopedia articles (including the article images and facts) can be freely used under Attribution-ShareAlike license, unless stated otherwise. Cite this article:
Bonnot Gang Facts for Kids. Kiddle Encyclopedia.