Bonsecours Market (French: Marché Bonsecours), at 350 rue Saint-Paul in Old Montreal, is a two-story domed public market. For more than 100 years, it was the main public market in the Montreal area. It also briefly accommodated the Parliament of United Canada for one session in 1849.

Named for the adjacent Notre-Dame-de-Bon-Secours Chapel, it opened in 1847. During 1849 the building was used for the Legislative Assembly of the Province of Canada. The market's design was influenced by Dublin's Customs House. 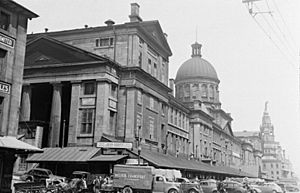 Construction of this Palladian style building began in 1844 and were completed in 1847. It was designed by British architect William Footner, and alterations completed in 1860 were designed by Irish-born Montreal architect George Browne (1811–1885). Bonsecours Market also housed Montreal City Hall between 1852 and 1878. The former city hall chambers later became a 3700-square-meter meeting room.

The market building was also a venue for banquets, exhibitions and other festivals. Browne was charged with adding a 900-square-meter concert hall and banquet hall.

The building continued to house the farmer's central market, an increasingly multicultural mix of small vendors, until it was closed in 1963 and slated for demolition. However, the building was later transformed into a multi-purpose facility, with a mall that houses outdoor cafés, restaurants and boutiques on the main and second floors, as well as a rental hall and banquet rooms on the lower and upper floors and municipal office space.

Bonsecours Market was designated a National Historic Site of Canada in 1984. 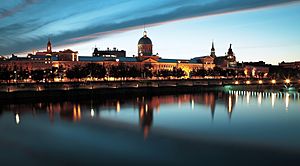 All content from Kiddle encyclopedia articles (including the article images and facts) can be freely used under Attribution-ShareAlike license, unless stated otherwise. Cite this article:
Bonsecours Market Facts for Kids. Kiddle Encyclopedia.