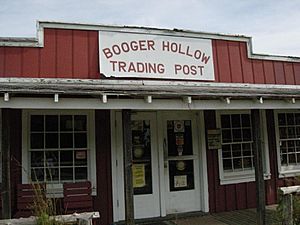 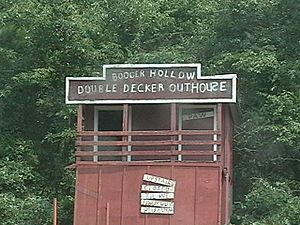 Booger Hollow was a tourist attraction in Pope County, Arkansas. A sign near the town's entrance reads "Population 7...countin' one coon dog". The town also had several novelties available for tourists located in its trading post, which also functioned as the post office and bait shop.

The attraction actually lies a couple of miles from the real community of Booger Hollow, Arkansas. It is also located on a hilltop, instead of within a hollow.

The owner of the Booger Hollow Trading Post decided to sell in 2004, but the new owners have not reopened the attraction. A similar attraction, Chigger Hollow, opened further south on Highway 7 in early 2007.

The main attraction in the town was a two-story outhouse.

All content from Kiddle encyclopedia articles (including the article images and facts) can be freely used under Attribution-ShareAlike license, unless stated otherwise. Cite this article:
Booger Hollow, Arkansas Facts for Kids. Kiddle Encyclopedia.