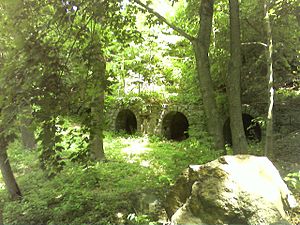 The Boonton Iron Works were founded about 1770 by Samuel Ogden who, with others in his family, purchased a 6-acre (24,000 m2) tract along the Rockaway River, near Boonton, New Jersey, United States. Here rolling and slitting mills were erected that engaged in the manufacture of nail rods and bar iron. With the construction of the Morris Canal in 1830, the New Jersey Iron Company was organized. This company built a new plant costing $283,000 and imported skilled mechanics from England. Under Fuller & Lord (1852–1876) the enterprise tended to become an integrated industry with ore and timber reserves, canal boats, furnaces, mills and auxiliary plants. After 1881, the business slowly declined. The plant closed in 1911.

All content from Kiddle encyclopedia articles (including the article images and facts) can be freely used under Attribution-ShareAlike license, unless stated otherwise. Cite this article:
Boonton Iron Works Facts for Kids. Kiddle Encyclopedia.