Boonton was originally formed on March 16, 1866, within portions of Hanover Township and Pequannock Township. The town was reincorporated and became fully independent on March 18, 1867.

The development of Boonton began in about 1829, as a result of the construction of the Morris Canal and the formation of the New Jersey Iron Company. The original location of the town is now largely under the Jersey City Reservoir, completed in 1904. In 1908, the waters from this reservoir were the first municipal water supply in the United States to be chlorinated. The decision to build the chlorination system was made by John L. Leal and the facility was designed by George W. Fuller.

During the 18th century, the settlement of Boonetown Falls (variously spelled as Booneton or the current Boonton) was established on the Rockaway River, about 1.5 miles (2.4 km) downstream from the current site of the town. As early as 1747, Obadiah Baldwin ran an iron refining forge there. He used the iron ore and charcoal available in the area together with water power from the river. As the ironworks grew, workers and their families formed a community in 1761 that was named "Boone-Towne" in honor of the Colonial Governor, Thomas Boone.

The present town developed separately from the settlement of Booneton Falls. The population moved away after 1830, when a canal was completed that drew off business and traffic. The site of Old Boonton downriver has been covered since 1903 by the Jersey City reservoir formed on the dammed river.

The Boonton Iron Works were founded about 1770 by Samuel Ogden of Newark, New Jersey. Together with brothers, he purchased a 6-acre (24,000 m2) tract along the Rockaway River. Throughout the American Revolutionary War, the Booneton Iron Works was busily engaged in supplying numerous miscellaneous iron products for the military. After the war, operations at Boonton were continued under John Jacob Faesch and his two sons, and, later, by William Scott. He tried to revive the declining business. In 1824, Scott's interest in rejuvenating the antiquated ironworks faded when he learned that the Morris Canal was soon to be constructed, and that it would bypass the community of Booneton a mile or more away.

But the proximity of the canal to Booneton Falls made that site ideal for a large factory. In 1830, a group of businessmen in New York City incorporated as the New Jersey Iron Company, with a capitalization of $283,000. Machinery and ironworkers were imported from England, and with the erection of the mills, a new community, called Booneton Falls, began to be developed on the rugged hillside overlooking the river.

The community Main Street is unique in that it is pitched against a cliff overlooking the 'Hollow' of the Rockaway River. This was said to follow an old Native American trail, developed from a deer path along the hillside.

The new Iron Company flourished for nearly 50 years. The settlement of Booneton Falls – like the older Booneton downstream – was essentially a one-industry town. After the Company closed down its operations in 1876, the town was on the verge of collapse. Although several attempts – one by Joseph Wharton – were made to re-establish iron works on a smaller scale, none endured for any great length of time. In the 21st century, only vestiges of foundations and structures remain in the "Hollow" between Plane Street and the river, to remind Boonton of its own Iron Age.

One of the first of the new industries secured for the town was a silk factory, which, as Pelgram & Meyer, and, later as Van Raalte, Inc., contributed materially to the town's prosperity. Others that followed were a knife factory, a paper mill (at the old settlement, by then called Old Boonton), a nail factory, a brass and iron foundry, and a carriage factory. The Morris Canal, although going into a rapid decline when superseded by railroads, still employed a number of men. The Lackawanna Railroad completed its Boonton-Paterson branch in 1875, giving employment to a number of Boonton people and providing commuter service to Boonton residents who worked in New York City. The town supported many individually owned businesses, such as blacksmith shops, machine shops, bakeries and a miscellany of stores, which began to prosper anew as the nation emerged from the depression of the 1870s.

In 1891, the Loanda Hard Rubber Company was founded by Edwin A. Scribner, and began the manufacture of molded hard rubber products. After Scribner died, the management of the firm fell to his son-in-law Richard W. Seabury. In 1906, Seabury learned of experiments with synthetic resins made by Dr. Leo Baekeland, for whom Bakelite was later to be named. Originally intended by Dr. Baekeland for a synthetic varnish, the new material was used by Seabury in making the world's first molding of organic plastics in 1907. Boontonware, a molded plastic dinnerware, was sold nationwide.

George Scribner, son of Loanda founder Edwin Scribner, opted to continue the business of plastics molding and established Boonton Molding. The company produced the line of Boontonware dinnerware, molded plastic plates, bowls, and cups manufactured in the 1950s and 1960s. The company also operated a factory outlet store in Boonton for many years. George Scribner was eventually inducted into the Plastics Hall of Fame as a pioneer in developing molding techniques and applications at Boonton Molding Co. from 1920. He is considered a preeminent contributor to the development of the industry through his services as president and board chairman of the SPI during the period 1943–1947.

The molded plastics industry attracted the radio and electronics industries to the Boonton area. In the 1920s, the burgeoning radio industry created a large demand for molded parts. Richard W. Seabury organized Radio Frequency Laboratories to exploit that new field. More than a half dozen radio and electronics firms were later formed as spin-offs, and recognized internationally for the excellence of their products. Radio engineers had respect for the Boonton Radio Co., located in nearby Rockaway, which manufactured a high-quality test instrument known as a Q meter, still used by hobbyists today. Most of those companies have been bought up and are now divisions of larger corporations and have relocated elsewhere, having undergone name changes in many cases. The Boonton Radio Co., for instance, was purchased by Hewlett-Packard. RFL Industries, Aircraft Radio Corporation, Measurements Corporation, and Ballantine Laboratories are among those that contributed materially to the prosperity of the area.

In 1917, E.A. Stevenson & Company established the "Butter Works" on the site of the old Knox Hat factory. Stevenson started processing coconut and other vegetable oils and making margarine. Under later operation by E.F. Drew & Company, the Boonton plant grew to be one of the largest edible oils processors in the country. It was the largest industry in the town of Boonton during the 20th century. The plant closed in the early 1990s, and the site was developed for a Walmart store.

In recent years, Boonton has attracted several art galleries. Most of the galleries are located on the 800 block of Main Street, with a total of six galleries in the area surrounding Boonton Avenue and Main Street. This is often referred to as the Boonton Art District. The galleries hold an art walk showcasing gallery openings on the first Friday of each month. 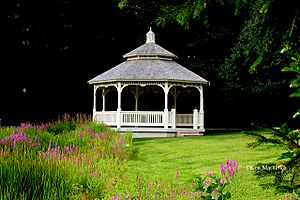 The Rockaway River flows through the downtown section and forms a short gorge with whitewater rapids including a waterfall that is 25 feet (7.6 m) high.

There were 3,235 households out of which 29.0% had children under the age of 18 living with them, 48.6% were married couples living together, 11.8% had a female householder with no husband present, and 34.7% were non-families. 26.2% of all households were made up of individuals, and 8.7% had someone living alone who was 65 years of age or older. The average household size was 2.54 and the average family size was 3.10.

Boonton had the highest percentage of Pakistani ancestry people at 3.53%, of any place in the United States with 1,000 or more residents listing their ancestry. As of the 2000 Census, 1.3% of residents identified themselves as being of Turkish American ancestry, the fifth-highest of any municipality in the United States and third-highest in the state.

There were 3,272 households out of which 28.5% had children under the age of 18 living with them, 51.6% were married couples living together, 11.0% had a female householder with no husband present, and 34.0% were non-families. 26.3% of all households were made up of individuals and 9.5% had someone living alone who was 65 years of age or older. The average household size was 2.55 and the average family size was 3.11.

NJ Transit bus service is provided on the 871 local route, which replaced service offered until 2010 on the MCM1 route. 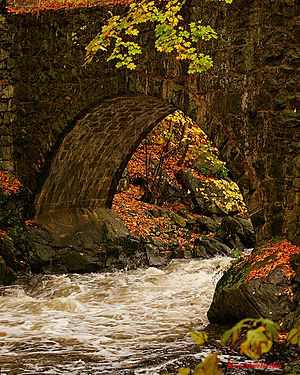 The Boonton Holmes Public Library has been in operation since 1894. The building in which it resides was willed to the Town of Boonton by James Holmes for use as a public library. Holmes was born March 7, 1815, in Massachusetts and moved to Boonton in 1850 to take charge of the Taylor & Lord Nail Factory. Since he had spent much of his early life moving from place to place and from job to job when he was able to lay down roots in Boonton he developed a strong loyalty to the town and committed himself to its development. He became very involved in local politics and used his fortune to help develop municipal organizations and community projects. Holmes held several political posts in his life such as serving as Mayor of Boonton, on the State Board of Education, and on the Boonton Board of Education. Holmes also used his wealth to improve the town, one example was when he donated the land and purchased the equipment to begin the firehouse in South Boonton. He served as a volunteer fire fighter in Boonton from the time he arrived until his death. Holmes also started the first Boonton National Bank and served as its president. Mr. Holmes died on February 26, 1893.

The building itself dates much further back to when Eliza A. Scott purchased the corner lot in 1849 from the New Jersey Iron Company. Miss Scott built the first structure on the site in that same year. In 1850, the Iron Company engaged James Holmes to serve as superintendent of the nail factory which had just been constructed. James Holmes bought the property and 2 lots for $5,000 in 1856. He resided at his mansion house until his death in February 1893. Mr. Holmes bequeathed his house and lot to the Boonton Library Association which had incorporated in 1890. On July 1, 1893, the Association disbanded and reorganized itself as the Holmes Library which had been established in May under the terms of Mr. Holmes' will. The gift included the mansion house, $5,000 for endowment purposes only, $2,000 for refitting the house as a library, and $1,000 for the purchase of books. The will stipulated that the Library be governed by a Board of Trustees composed of three lifetime members appointed by him, one member from each of the existing churches at the time, and one member from the Board of Education. The Library officially opened in 1894. Since its opening the library itself has only been on the first floor, and in later years the basement. The upper two floors have been used, at various times, as business space, a Masonic Hall, and most recently as three apartments. The basement also has been used commercially and has at one time housed the printing press for the Boonton Times newspaper. In 1895, Charles Grubb rented rooms in the Holmes Library and installed presses in the basement where on Oct 4, 1895 he published the first issue of The Boonton Times newspaper. In 1911, he moved to the corner of Main and Cornelia Streets. The Boonton Holmes Library has gained control of the entire building and is currently beginning renovations to the structure so that the upper floors can be used by the public. The Boonton Holmes Public Library was placed on the National Register of Historic Places, on November 30, 1972.

All content from Kiddle encyclopedia articles (including the article images and facts) can be freely used under Attribution-ShareAlike license, unless stated otherwise. Cite this article:
Boonton, New Jersey Facts for Kids. Kiddle Encyclopedia.