Well known as the "Hub of Morris County" for its strategic location along major transportation routes at the center of the county. Denville is notably home to an "eclectic downtown" in addition to four membership lake communities developed a century ago as summer colonies.

NJ Transit rail service is available at the Denville station, a large three-platform station serving both the Morristown and the Montclair-Boonton train lines, with service to Hoboken Terminal or to Penn Station in Midtown Manhattan via Midtown Direct. It is part of the New York City metropolitan area.

Denville was formed as a township by an act of the New Jersey Legislature on April 14, 1913, from portions of Rockaway Township. In 1988, as part of the town's 75th anniversary celebration, a time capsule was buried that contained artifacts from that era.

Native Lenape Native Americans were known to travel the Minisink Trail for centuries before Europeans arrived in New Jersey. Part of that trail cut across what is now southern Denville, roughly following the course of Route 10 and Mount Pleasant Turnpike. Some research has indicated that there was a Lenape campsite along the trail in Denville, on or near the Ayres / Knuth Farm Historic Site along Route 10.

When Dutch and English settlers began to arrive in the new world in the early 17th century, the Minisink Trail was the likely route they traveled to explore the interior. Daniel Denton, one of the purchasers of what is known as the Elizabethtown Tract in 1664, led an expedition into the interior of northern New Jersey. In 1670, he wrote the first English language description of the area. Some researchers conclude that the name "Denville" derives from Denton.

Some researchers have suggested that European settlers began to come to the Denville area as early as 1690. These early settlers were primarily Dutch and English from Long Island, Quakers from Philadelphia, and Germans. William Penn and several other proprietors began to survey and stake out lands in the Denville area around 1715. These surveys are the first documentation of Denville. Between 1730 and 1760, several forges and mills were erected in Denville along the Rockaway River and the Denbrook. A number of communities associated with the forges and mills began to emerge. Ninkey and Franklin in southern Denville developed around the forges there of the same names. Denville village developed around the Job Allen Iron Works. Early developers of Denville, such as the Hussa family and A.B Crane & Co., were intrinsic in shaping the residential and lake communities.

A letter from early Denville settler John Hinchman in the year 1800, recounts some of the oral history of Denville from 50 years earlier, as stated to him by some of the elders of the time. Hinchman explains in his letter that the naming of Denville can be traced to a "den" of wild animals located in the swampy regions along the Denbrook and Rockaway River. The animals would bask on a knoll that juts out into the meadows where they were hunted by the native Lenape. This "den", Hinchman states, was the basis for the name of Denville and the Denbrook. 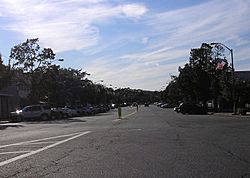 The Tourne county park is in portions of Denville, Boonton Township and Mountain Lakes. The park covers more than 540 acres (220 ha) of undeveloped land and offers a view of the New York City skyline from its peak standing 897 feet (273 m) high.

Denville has 11 named bodies of water within township limits. The four major residential lake communities are Cedar Lake, Indian Lake, Rock Ridge and Lake Arrowhead (including Great Bay and Bay of Deep Waters). Estling Lake is a private summer community, which has some full year residents. The three minor lakes are Cooper Lake, Hollstein Lake, and Openaki Lake. The town also has Cooks Pond, a recreational lake available for public use by membership.

Most residents of Denville live in the non-lake communities in the township, including Bald Hill, Union Hill, and Beacon Hill, communities among others.

The game of American flag rugby was first played in Denville, introduced to the town by resident Tom Feury.

There were 6,432 households out of which 32.1% had children under the age of 18 living with them, 59.8% were married couples living together, 7.6% had a female householder with no husband present, and 29.9% were non-families. 25.6% of all households were made up of individuals, and 13.1% had someone living alone who was 65 years of age or older. The average household size was 2.57 and the average family size was 3.12. 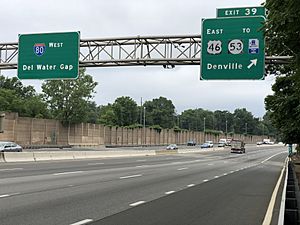 The Denville station offers train service to Hoboken Terminal or to Penn Station in Midtown Manhattan via Midtown Direct on NJ Transit's Morristown Line and Montclair-Boonton Line. Denville is actually two stations located within the same property. The Morristown Line station is two platforms located on a curve while the Montclair-Boonton Line station is a single platform next to the closed Denville Tower.

NJ Transit offers local bus service on the 875 and 880 routes, which replaced service that had been offered on the MCM2 and MCM10 routes until June 2010, when NJ Transit pulled the subsidy.

Denville is served by Lakeland Bus Lines with frequent service to the Port Authority Bus Terminal in Midtown Manhattan.

The game of American flag rugby was first played in Denville, introduced to the township by resident Tom Feury.

Students in public school for ninth through twelfth grades typically attend Morris Knolls High School, which is located in Denville, but has a Rockaway address, along with most students from Rockaway Township. The high school is part of the Morris Hills Regional High School District, which also serves the residential communities of Rockaway Borough and Wharton. As of the 2018–19 school year, the high school had an enrollment of 1,434 students and 128.4 classroom teachers (on an FTE basis), for a student–teacher ratio of 11.2:1.

St. Mary's Prep is a K-8 elementary school founded in 1954, and Morris Catholic High School is a four-year comprehensive Roman Catholic regional high school that was founded in 1957, both of which are operated as part of the Diocese of Paterson.

Assumption College for Sisters is a two-year Roman Catholic women's college. Founded in 1953 through an affiliation with Seton Hall University, Assumption is run by the Sisters of Christian Charity. Primarily designed to prepare women for work in religious vocations, Assumption specializes in theological studies and the liberal arts. It is the last remaining sisters' college, or college primarily designed to educate nuns, in the United States. In 2014, the school relocated to a convent on the campus of Morris Catholic High School.

People who were born in, residents of, or otherwise closely associated with Denville include:

All content from Kiddle encyclopedia articles (including the article images and facts) can be freely used under Attribution-ShareAlike license, unless stated otherwise. Cite this article:
Denville Township, New Jersey Facts for Kids. Kiddle Encyclopedia.