Wharton was originally incorporated as the borough Port Oram by an act of the New Jersey Legislature on June 26, 1895, created from portions of Randolph Township and Rockaway Township, subject to the results of a referendum passed on the previous day; the name was changed to Wharton on April 16, 1902, based on a referendum held that day and subject to legislation passed on March 27, 1902. The borough was named for Joseph Wharton of the Wharton Steel Company.

In 1831, the Morris Canal was completed from Newark to Phillipsburg, New Jersey across the Delaware River from the terminus of the Lehigh Canal. On the way, it passed through Boonton, Dover and Port Oram. On this route it tapped the Morris County ore fields and became a carrier for both ore and pig iron. Its main purpose, however, was as an extension of the Lehigh Canal to furnish a route for anthracite coal from the Pennsylvania mines to seaboard. Any local traffic was a gain to supplement the through anthracite freight and iron ore and its products soon became important sources of revenue. Sites on the canal were selected for docks and industry, including iron works.

On June 28, 1895, voters from the settlements Port Oram, Irondale, Luxemburg, Maryville and Mount Pleasant voted 143 to 51 to incorporate as the borough Port Oram, the largest of the communities in the area covering 2.25 square miles (5.8 km2) west of Dover, New Jersey. A mayor, six councilmen, an assessor and a collector were elected to govern the new borough which had started life as an ore shipping port on the Morris Canal. These elected officials (mine superintendents, store owners, a railroad superintendent and a school teacher) represented the leaders of these settlements where iron ore was mined, smelted and shipped.

The borough was renamed in 1902 in honor of Joseph Wharton, who was born in 1826 in Philadelphia to an old family of Quakers. Wharton first studied at a local Quaker school after which he worked on a farm rather than attend college because his parents wanted him to mature, and during the winter studied chemistry at the laboratory of Martin Hans Boyè in Philadelphia. He started producing zinc and nickel, and gradually bought a controlling interest in Bethlehem Iron Works. As his business interests expanded he purchased substantial shares of several railroads involved in the coal and iron trade, also purchasing iron mines and furnaces near Port Oram. After selling his interest in Bethlehem Iron Works in 1901 and his nickel works to CVRD Inco in 1902, he continued to actively acquire and manage a large and diverse business empire that included iron smelting in Wharton until just before his death in January, 1909. Wharton also endowed the Wharton School of the University of Pennsylvania. The town was named after him at after a referendum in 1902.

In 1984, the long-time local bar The Heslin House and Hartley's Store were destroyed in a gas leak explosion, in which flames as high as 100 feet (30 m) destroyed several area buildings.

Wharton was used as a filming location for Cyndi Lauper's music video "Time After Time" in 1984.

The borough borders the Morris County municipality of Dover.

The climate in this area is characterized by hot, humid summers and generally mild to cool winters. According to the Köppen Climate Classification system, Wharton has a humid subtropical climate, abbreviated "Cfa" on climate maps. 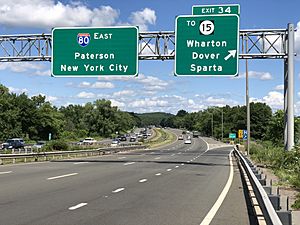 I-80 eastbound at Route 15 in Wharton

Interstate 80 and New Jersey Route 15 are the main highways serving Wharton. I-80 travels east–west, while Route 15 is oriented north–south.

The Wharton Borough School District serves public school students in kindergarten through eighth grade. As of the 2018–19 school year, the district, comprised of two schools, had an enrollment of 738 students and 73.7 classroom teachers (on an FTE basis), for a student–teacher ratio of 10.0:1. Schools in the district (with 2018–19 enrollment data from the National Center for Education Statistics) are Marie V. Duffy Elementary School with 462 students in grades K - 5 and Alfred C. MacKinnon Middle School with 271 students in grades 6 - 8.

Public school students in ninth through twelfth grades attend Morris Hills High School, located in Rockaway Borough, and which also serves portions of Rockaway Borough and Rockaway Township. As of the 2018–19 school year, the high school had an enrollment of 1,279 students and 118.4 classroom teachers (on an FTE basis), for a student–teacher ratio of 10.8:1. The high school is part of the Morris Hills Regional High School District, which also includes students from Denville Township, who attend Morris Knolls High School along with students from parts of Rockaway Borough and Rockaway Township.

People who were born in, residents of, or otherwise closely associated with Wharton include:

All content from Kiddle encyclopedia articles (including the article images and facts) can be freely used under Attribution-ShareAlike license, unless stated otherwise. Cite this article:
Wharton, New Jersey Facts for Kids. Kiddle Encyclopedia.