Mine Hill was incorporated as a township by an act of the New Jersey Legislature on March 2, 1923, from portions of Randolph Township, based on the results of a referendum held on May 8, 1923.

The township's name comes from the history of mines in the area. Mining in Mine Hill dates back to the early 18th century and the township had some of the richest sources of iron ore in the country. Mahlon Dickerson, who was New Jersey's 12th Governor, and his family owned the Dickerson Mine, which was the largest ore mine in the area, supplying much of the iron ore used during the American Revolutionary War. The last mine in the township closed in the late 1960s.

There were 1,329 households out of which 31.8% had children under the age of 18 living with them, 57.7% were married couples living together, 9.9% had a female householder with no husband present, and 26.5% were non-families. 20.3% of all households were made up of individuals, and 7.2% had someone living alone who was 65 years of age or older. The average household size was 2.75 and the average family size was 3.16. 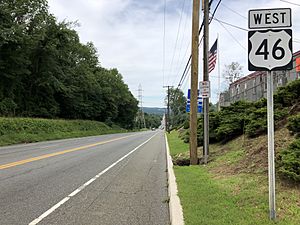 US 46 westbound in Mine Hill Township

U.S. Route 46 is the main highway serving Mine Hill Township. Interstate 80 and New Jersey Route 10 are accessible in adjacent municipalities.

NJ Transit offered local bus service on the MCM5 route, which was eliminated in 2010 when subsidies to the local provider were eliminated as part of budget cuts.

The Mine Hill School District serves students in pre-kindergarten through sixth grade at Canfield Avenue School. As of the 2018–19 school year, the district, comprised of one school, had an enrollment of 347 students and 34.0 classroom teachers (on an FTE basis), for a student–teacher ratio of 10.2:1.

During the 1991–92 school year, Canfield Avenue School was recognized with the National Blue Ribbon School Award from the United States Department of Education, the highest honor that an American school can achieve.

People who were born in, residents of, or otherwise closely associated with Mine Hill Township include:

All content from Kiddle encyclopedia articles (including the article images and facts) can be freely used under Attribution-ShareAlike license, unless stated otherwise. Cite this article:
Mine Hill Township, New Jersey Facts for Kids. Kiddle Encyclopedia.