According to the 2010 Census, Randolph was the 3rd most-populous municipality in Morris County and its 21 square miles (54 km2) land area is the 8th largest in the county. The New Jersey State Planning Commission designates Randolph as half rural, half suburban. The community maintains a diverse population of nearly 26,000 residents.

In 2013, in the Coldwell Banker edition of “Best Places to Live in New Jersey for Booming Suburbs,” Randolph was the number one ranked town in Morris County and fourth overall in the state citing "job growth, high percentage of home ownership, good schools, access to local shopping and community safety." Niche.com ranked Randolph amongst the Top 50 in its 2019 rankings of the "Best Places to Live" in New Jersey.

Established in 1968, the County College of Morris is located on 220+ acres in the northern part of the township along Route 10.

The earliest known inhabitants of what is now Randolph were the Lenni Lenape Native Americans. The earliest European settlers of what is now Randolph were Quakers and one of the pioneering landowners was Hartshorne Fitz-Randolph, who purchased 1,000 acres (4.0 km2) of what would become the township in the Mine Hill area in 1753, later becoming the namesake of the township. New Jersey's first iron mine was established in Randolph in 1713, and for hundreds of years the mines fostered the development of the township, providing the raw materials for weapons used by the Continental Army during the American Revolutionary War. During the war, the area was a supply point for George Washington's army during their winter encampment in nearby Jockey Hollow.

Randolph became a vacation haven in the early part of the 20th century, known for its woods, ponds, lakes and air. Through the 1950s, farms, large hotels and bungalow colonies dotted the community. Performers such as Phil Silvers, and Frank Sinatra appeared at the hotels. Boxers Max Baer, Floyd Patterson, James J. Braddock and Rocky Marciano trained or fought at the Saltz Hotel.

Randolph's township historical landmarks include the Liberty Tree (which dates back to 1720), the 1869 Bryant Distillery (famed for its applejack) and the 1924 Millbrook School, now rehabilitated and in use as offices.

The Randolph Historical Society has preserved the township's historical heritage in the Museum of Old Randolph. One of Randolph's oldest streets, Gristmill Road, is on the National Register of Historic Places.

Land in Randolph ranges from 551 feet (168 m) to 1,120 feet (340 m) above sea level. Randolph Township has been designated half rural, half suburban by the New Jersey State Planning Commission.

Situated upstream of the Black River, the South Branch of the Raritan River, the Whippany River and the Rockaway River, the hills of Randolph attracted settlers and its streams provided power for industry.

The township is located within the New Jersey Highlands, one of New Jersey's four major physiographic provinces. Part of the Appalachian Mountains, the Highlands are characterized by alternating flat-topped ridges and deep-striking valleys.

There were 9,013 households out of which 42.3% had children under the age of 18 living with them, 68.6% were married couples living together, 7.0% had a female householder with no husband present, and 21.5% were non-families. 17.8% of all households were made up of individuals, and 5.8% had someone living alone who was 65 years of age or older. The average household size was 2.85 and the average family size was 3.26.

Freedom Park covers 172 acres (70 ha). Facilities include (all lighted): a football field, a lacrosse field (complete with two defibrillators, after a player was hit with a lacrosse ball in the heart), a Little League field, a Babe Ruth baseball field, a multipurpose area, a softball field, a picnic pavilion, a sand volleyball court, and a playground area.

Randolph Park covers 41 acres (17 ha). It has a beach. Other facilities include a beach house with a changing room, a refreshment stand, a picnic facilities, a playground area, a permanent docks for lap swimming, a volleyball court and a basketball court.

Stonybrook Park covers 30 acres (12 ha). This park is used as a day camp during the summer months (June - August) and is divided by a local street to create east and west sections. Facilities include a field in the western portion, while the eastern portion hosts the day camp with a swimming pool, a small tot-lot, and various buildings for camp activities.

Rosenfarb Park facilities include a half-court basketball court and a picnic area. 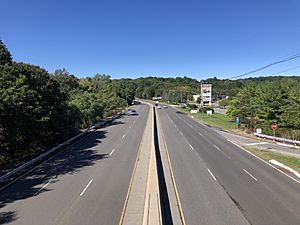 NJ Transit offered local bus service on the MCM2 and MCM7 routes which were eliminated due to budget constraints.

Randolph has organized events, including high school sports, senior citizen gatherings, and various group activities. The public library schedules reading groups and other programs. Games and socials are held at the Senior Citizen Center at the Brundage Park Playhouse, which presents plays and musicals with youth and adult performers.

Recreation programs are available for children, teenagers and adults.

The Gottesman RTW Academy (Formerly Hebrew Academy of Morris County) is a coeducational Jewish day school for students in preschool through eighth grade, serving approximately 225 children. The school has been recognized as a recipient of the National Blue Ribbon School Award by the United States Department of Education.

People who were born in, residents of, or otherwise closely associated with Randolph include:

All content from Kiddle encyclopedia articles (including the article images and facts) can be freely used under Attribution-ShareAlike license, unless stated otherwise. Cite this article:
Randolph, New Jersey Facts for Kids. Kiddle Encyclopedia.