Jockey Hollow was used as a winter encampment by the Continental Army during the American Revolutionary War from December 1779 to June 1780. It is located in Harding Township, Morris County, New Jersey and is now a contributing site of the Morristown National Historical Park.

On October 17, 1779, the Continental Army camped for the winter at Jockey Hollow. Soldiers camped at this location until June, 1780, during which they endured some of the harshest conditions of the war. This was strategically sound because the elevation of Jockey Hollow was several hundred feet above the British to the east. The mountainous range also allowed revolutionary soldiers to spot British movement. In the days of horsepower, this was considered an impregnable redoubt. Another reason why the location was chosen was because the surrounding area held citizens that were sympathetic to the rebel cause. That winter was the "cruelest" of the war, including the one at Valley Forge the two years before. Twelve men often shared one of over one thousand simple huts built in Jockey Hollow to house the army. Desertions were commonplace. The entire Pennsylvania contingent successfully mutinied, and later 200 New Jersey soldiers attempted to emulate them. Several of the ringleaders of the latter were hanged. 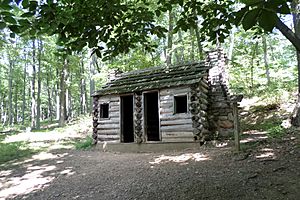 Soldiers had to build their own huts including surrounding trenches for drainage. The huts, made of log, were 14 by 16 feet (4.3 by 4.9 m) and 6.5 feet (2.0 m) high. Twelve men often shared one of over one thousand simple huts built in Jockey Hollow to house the army. Inside the huts soldiers had a fireplace for warmth and cooking. To create a floor they packed the ground for an earthen floor. Soldiers also had to make their own furniture, including bunks and tables. Their bunks got covered with straw and each soldier was given one blanket. Soldiers huts were about 2 to 3 ft (50–100 cm) apart, with three rows of eight huts for each regiment. By 1780, soldiers had built about 1,200 huts in Jockey Hollow.

All content from Kiddle encyclopedia articles (including the article images and facts) can be freely used under Attribution-ShareAlike license, unless stated otherwise. Cite this article:
Jockey Hollow Facts for Kids. Kiddle Encyclopedia.