The Border Terrier is a small, rough-coated breed of dog in the terrier group. Bred as a fox and vermin hunter, the Border Terrier shares ancestry with the Dandie Dinmont Terrier and the Bedlington Terrier.

The Border Terrier was officially recognized by The Kennel Club in Great Britain in 1920, and by the American Kennel Club (AKC) in 1930. The border terrier was bred to have long enough legs to keep up with the horses and other foxhounds, which traveled with them, and small enough bodies to crawl in the burrows of foxes and chase them out so the hunters had a blank shot. The foxhounds that traveled with them were not small enough to do the Border terrier's job.

In 2006, the Border Terrier ranked 81st in number of registrations by the AKC, while it ranked tenth in the United Kingdom.

In 2008, the Border Terrier ranked eighth in number of registrations by the UK Kennel Club.

They were originally used for hunting in packs as they excel at catching rabbits and any small animal. Now they are commonly seen as family pets. 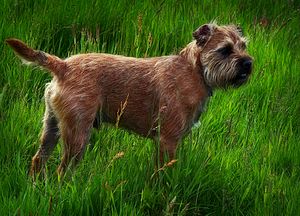 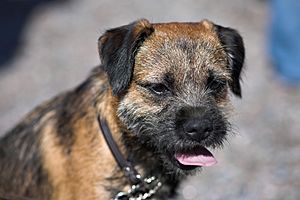 Identifiable by their otter-shaped heads, Border Terriers have a broad skull and moderately short muzzle, and strong teeth. The V-shaped ears are on the sides of the head and fall towards the cheeks. Common coat colors are grizzle-and-tan, blue-and-tan, red, or wheaten. Whiskers are few and short. The tail is naturally moderately short, thick at the base and tapering.

The Border Terrier has a double coat consisting of a short, dense, soft undercoat and harsh, wiry weather- and dirt-resistant, close-lying outer coat with no curl or wave. This coat usually requires hand-stripping twice a year to remove dead hair. It then takes about eight weeks for the top coat to come back in. For some dogs, weekly brushing will suffice. Most Border Terriers are seen groomed with short hair but longer hair can sometimes be preferred.

Though sometimes stubborn and strong willed, border terriers are sound dogs. They are friendly and rarely aggressive. They are good with children, but may chase cats and other small pets.

Borders do well in task-oriented activities and have a surprising ability to jump high and run fast given the size of their legs. The breed has excelled in agility training, but they are quicker to learn jumps and see-saws than weaving poles. They take training for tasks very well, and are extremely trainable, and capable of learning tricks quickly and competently. The border in recent years has been bred to harbor a more subtle character so are more adaptable to apartment living if properly exercised.

They are intelligent and eager to please, but they retain the capacity for independent thinking and initiative that were bred into them for working rats and fox underground. Their love of people and even temperament make them fine therapy dogs, especially for children and the elderly, and they are occasionally used to aid the blind or deaf. From a young age they should be trained on command.

Borders can adapt to different environments and situations well, and are able to deal with temporary change well. They will get along well with cats that they have been raised with, but may chase other cats and small animals such as mice, birds, rabbits, squirrels, rats, and guinea pigs.

Borders are very independent and loyal. Some borders are known to be territorial and will protect their homes. They have a strong sense of smell.

Borders love to sit and watch what is going on. Walks with Borders will often involve them sitting and lying in the grass to observe the environment around them. 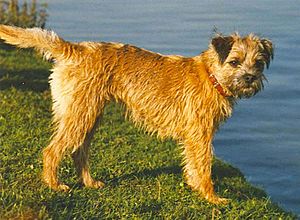 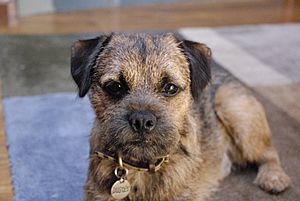 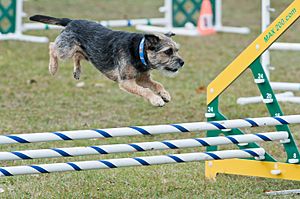 Borders are a generally hardy breed, though there are certain genetic health problems associated with them, including:

A UK Kennel Club survey puts their median lifespan at 14 years and listed a maximum age of 22 years, one month.

Border Terriers have earned more American Kennel Club (AKC) Earthdog titles than any other terrier. An AKC earthdog test is not true hunting, but an artificial, non-competitive, exercise in which terriers enter 9 in (23 cm) wide smooth wooden tunnels, buried under-ground, with one or more turns in order to bark or scratch at caged rats that are safely housed behind wooden bars. The tests are conducted to determine that instinctive traits are preserved and developed, as the breed originators intended for the dogs to their work. While earthdog tests are not a close approximation of hunting, they are popular in the U.S. and in some European countries because even over-large Kennel Club breeds can negotiate the tunnels with ease, dogs can come to no harm while working, and no digging is required. Since Border Terriers are "essentially working terriers", many Border Terrier owners consider it important to test and develop their dogs' instinct. These tests also provide great satisfaction for the dogs. The American Working Terrier Association (AWTA) does conduct "trials"; where the dogs instincts are tested, and then judged to determine a "Best of Breed" Earthdog.

Originally the Border Terrier was referred to as the Coquetdale Terrier or Redesdale Terrier from the area in which it evolved, but by the late 1800s it was generally known as the Border Terrier, probably because of its long history with the Border Hunt in Northumberland. It shares its ancestry with that of the Bedlington Terrier and the Dandie Dinmont Terrier. It was recognised as a breed by the Kennel Club in 1920, the same year The Border Terrier Club was formed. Their original purpose was to bolt foxes which had gone to ground. They were also used to kill rodents, but they have been used to hunt otters and badgers too.

All content from Kiddle encyclopedia articles (including the article images and facts) can be freely used under Attribution-ShareAlike license, unless stated otherwise. Cite this article:
Border Terrier Facts for Kids. Kiddle Encyclopedia.