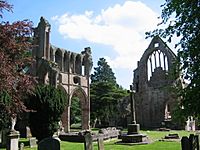 The Borders Abbeys Way is a long-distance footpath in the Scottish Borders area of Scotland. It is a circular walkway and is 109 kilometres (68 mi) in length. The theme of the footpath is the ruined Borders abbeys (established by David I of Scotland) along its way: Kelso Abbey, Jedburgh Abbey, Melrose Abbey and Dryburgh Abbey. These abbeys were homes to monks, who lived there between the 12th and 16th centuries. The route also passes through the towns of Hawick and Selkirk, and close to Abbotsford House, the home of Sir Walter Scott. Along the Borders Abbeys Way there are several rivers: Jed Water, River Teviot, River Tweed, Ale Water, and Rule Water.

The route was opened in 2006, and is managed and maintained by Scottish Borders Council. It is now designated as one of Scotland's Great Trails by NatureScot. The route links with four of the other Great Trails: the Cross Borders Drove Road, the Romans and Reivers Route, St Cuthbert's Way and the·Southern Upland Way. About 15,000 people use the path every year, of whom over 2,000 complete the entire route.

Two walkers, Jack Low and Garry Cossar, became the first to complete the full trail in under 24 hours in June 2017. The feat was reported in the Southern Reporter, Border Telegraph and Hawick News.

Sections of the Walk

Most people choose to do the walk in one day for each segment.

All content from Kiddle encyclopedia articles (including the article images and facts) can be freely used under Attribution-ShareAlike license, unless stated otherwise. Cite this article:
Borders Abbeys Way Facts for Kids. Kiddle Encyclopedia.