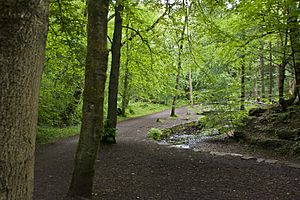 The path through Borsdane Wood

The wood consists of approximately 34 hectares (85 acres) of mixed broadleaf trees including species such as oak, ash, birch, cherry, hazel, hawthorn, blackthorn and dog rose, as well as areas of open ground. With trees many hundreds of years old the wood has remained relatively unchanged for centuries and is home to a wide variety of wildlife. The wood follows the course of the Borsdane Brook which is the boundary between Hindley and Westhoughton and the Metropolitan Boroughs of Wigan and Bolton. The brook flows through Wigan, Pennington Flash and into the Glaze Brook.

From Hindley, Greater Manchester there are several entrances to the wood, one of which can be accessed from Hindley centre through Raynor Park or through the cemetery. A tunnel under the railway leads into woodland little changed in centuries. A path leads to Aspull, Greater Manchester where the access is located near the Gerrard Arms Public House.

The town of Westhoughton is adjacent to the wood.

All content from Kiddle encyclopedia articles (including the article images and facts) can be freely used under Attribution-ShareAlike license, unless stated otherwise. Cite this article:
Borsdane Wood Facts for Kids. Kiddle Encyclopedia.