Westhoughton /wɛstˈhɔːtən/ is a town and civil parish of the Metropolitan Borough of Bolton in Greater Manchester, England. It is 4 miles (6 km) southwest of Bolton, 5 miles (8 km) east of Wigan and 13 miles (21 km) northwest of Manchester.

Historically in Lancashire, Westhoughton was once a centre for coal mining, cotton-spinning and textile manufacture. Today it is predominantly a residential town with a population of 23,056, increasing to 24,974 at the 2011 Census.

Westhoughton incorporates several former villages and hamlets which have their own distinctive character, sports traditions and amenities including railway stations. They include Wingates (famous for the Wingates Band), White Horse, Over Hulton, Four Gates (or Fourgates), Chequerbent, which was all but destroyed by the building of the M61 motorway, Hunger Hill, Snydale, Hart Common, Marsh Brook, Daisy Hill and Dobb Brow.

The name Westhoughton is derived from the Old English, "halh" (dialectal "haugh") for a nook or corner of land, and "tun" for a farmstead or settlement – meaning a "westerly settlement in a corner of land". It has been recorded variously as Halcton in 1210, Westhalcton in 1240,Westhalghton in 1292, Westhalton in 1302 and in the 16th century as Westhaughton and Westhoughton

The people of Westhoughton are known as "Howfeners" or "Keawyeds" (cow heads) or a combination of the two "Keawyedners", and the town is known as "Keawyed City". Supposed folklore ("re-invented" in the Edwardian period) describes a farmer who found his cow with its head stuck in a five barred gate, and, rather than damage the gate, cut the cow's head off, as the cow cost less than the gate. The Village of Tideswell in Derbyshire shares this same legend.

In 1315 a group of men led by Sir William Bradshaigh of Haigh Hall, Sir Henry Lea of Charnock Richard and Sir Adam Banastre met at Wingates to plan a campaign of violence against Sir Robert de Holland of Upholland, chief retainer of the powerful Earl of Lancaster. The campaign came to be known as the Banastre Rebellion and ended with the deaths of most the main protagonists.

On 15 December 1642, during the English Civil War, the Battle of Warcock Hill was fought on Westhoughton Common between Lord Derby's Cavalier forces and Parliamentarians. The site of the battle was off the Manchester Road where Wayfaring is today. The Parliamentarians under Captains Bradshaw, Venables and Browne ran into a force of some thousand Royalists from the Wigan garrison under Lord Derby and were forced to surrender. The three captains and 160 men were taken prisoner.

It is believed that Prince Rupert of the Rhine gathered his troops in Westhoughton before the attack and ensuing massacre at Bolton in 1644. Civil War activity is also known to have occurred around the site of Hunger Hill and a sword claimed to be from the time of the Civil War was discovered in the garden of one of the cottages at Pocket Nook in Chew Moor during the 1950s.

On 25 March 1812 a group of Luddites burned Rowe and Dunscough's Westhoughton Mill, in one of the first terrorist acts in Britain. Twelve people were arrested on the orders of William Hulton, the High Sheriff of Lancashire. James Smith, Thomas Kerfoot, John (or Job) Fletcher and Abraham Charlston, were sentenced to death for their part in the attack. The Charlston family claimed that Abraham was only twelve years old; but he was not reprieved. The men were publicly hanged outside Lancaster Castle on 13 June 1812. It was reported that Abraham cried for his mother on the scaffold. By this time, however, hanging of those under 18 was rare and of those under 16, in practice, abolished. Nine others were transported to Australia. The riots are commemorated by a blue plaque on the White Lion public house opposite the mill site.

The family of William Hulton of Hulton Park owned many small collieries from the 16th century. After 1828 the pits at Chequerbent were served by the Bolton and Leigh Railway. The Hulton Colliery Company sank Chequerbent Colliery in 1892 and Bank Pit Nos 1–4 between 1897 and 1901. The company mined the Trencherbone, Plodder and Arley seams. Bank Pit No 3, known as the Pretoria Pit, was the site of one Britain's worst coal-mining disasters when on 21 December 1910, 344 men and boys died in an explosion of firedamp. The Pretoria Pit Disaster was the third worst in British mining history, after the 1866 Barnsley Oaks Disaster in Yorkshire, and the 1913 Senghenydd Colliery Disaster in Glamorgan. A memorial erected in 1910 is grade II listed.

In 1896 the Wigan Coal and Iron Company's Eatock Pits employed 484 underground and 89 surface workers whilst the Hewlett Pits, at Hart Common, employed 981 underground and 182 on the surface.

Westhoughton covers an area of 4,341 acres (1,757 ha) and has an average breadth of over 2 miles (3.2 km) from north-east to south-west, and an extreme length of nearly 3.5 miles (5.6 km) from northwest to south-east. The highest ground at over 480 feet (150 m) is to the north east with the land sloping downwards to the south-west. The lowest point at about 120 feet (37 m) is in the extreme southerly corner. Borsdane Brook separates the township from Aspull, another brook divides it from Hindley joining a stream which rises on the northern edge of Westhoughton and flows south through Leigh to Glazebrook. The town incorporates several former villages and hamlets including railway stations including Wingates, White Horse, Over Hulton, Four Gates (or Fourgates), Chequerbent, Hunger Hill, Snydale, Hart Common, Marsh Brook, Daisy Hill and Dobb Brow.

† The 1939 population is estimated from the National Registration Act figures. The 1941 census did not take place because of the Second World War. 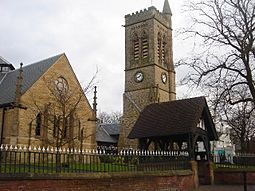 The parish church of St. Bartholomew

Westhoughton's old chapel of 1552 was replaced by a brick-built church in 1731 and a third church, the parish church, was built in 1869–70. The church, dedicated to Saint Bartholomew, had an east window depicting the twelve apostles. On 28 November 1990 the church was gutted by fire, but the tower was saved and is Grade II listed as is a sundial in the churchyard. A fourth church, designed by architect John Ashworth of Dane, Ashworth & Cottam, was built by Laing North West with Bradshaw Gass & Hope as project managers and structural engineers at a cost about £1 million. After the fire, services were held the parochial school and the church bought the town's redundant telephone exchange as church hall. The fourth church was consecrated on 28 October 1995 by the Right Reverend Christopher Mayfield, Bishop of Manchester. Nicholsons of Malvern built its two manual organ with 1,256 pipes, ranging from 1/2 inch to 16 feet (4.9 m) made of tin, spotted metal and hammered lead.

The Roman Catholic community is served by Sacred Heart Parish Church. When the old church building fell into disrepair, it was demolished and replaced by a new building incorporating a church hall. 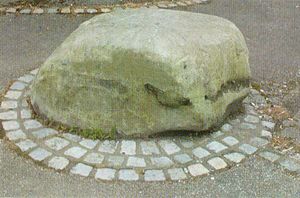 Stone from which John Wesley is said to have preached

The industrial north west was a focus for non-conformism, and until the 1990s the Church of the Nazarene stood in Church Street. The Quaker Meeting House is now a Christian fellowship, and a tin tabernacle was situated off Bolton Road. There is a Pentecostal church, a United Reformed Church, 'The Bethel' and an independent church on Tithbarn Street. 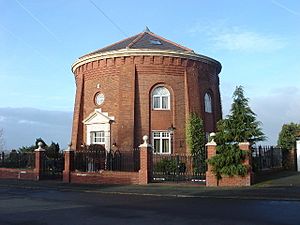 Snydle water tower was built by Westhoughton Council in 1914 and lay derelict for many years with its tank removed and the tower open to the sky. It has been restored and converted into a private dwelling that is visible from the M61 motorway.

The red brick and terracotta town hall and Carnegie library were built between 1902 and 1904 to the designs of Bradshaw & Gass.

The M61 motorway passes through the north of the town which it serves by junctions 5 and 6. The A58 and the A6 cross the town as do the B5236, the B5235, and the B5239. The motorway separated the townships of Hunger Hill and Chew Moor from the rest of Westhoughton and the Bolton Road was completely severed. A new link road, Snydle Way, was built between Chequerbent and a spur to the old Bolton Road, via a roundabout at M61 junction 5. Snydle Way, a broad, dual carriageway, was built to full 4 lane motorway standard, with a broad centre verge allowing widening to 6 lanes. The original intention was that it would form the beginning of a new motorway, running southwest, linking the M61 with the M6. Although the route was fully allocated and all planning and public consultation completed, the project was shelved due to financial constraints.

In the late-1980s a railway station planned for Dobb Brow was not built. Lostock and Horwich Parkway stations, to the north, also serve the town. The annual usage of Daisy Hill and Westhoughton stations was more than 500,000 passengers in 2013/14, greater than many major UK towns.

Electric trams to Bolton served Westhoughton until 1947 after 23 years of service. On 19 December 1924, the Bolton to Deane service was extended to Westhoughton).

All content from Kiddle encyclopedia articles (including the article images and facts) can be freely used under Attribution-ShareAlike license, unless stated otherwise. Cite this article:
Westhoughton Facts for Kids. Kiddle Encyclopedia.