Abram is a village and electoral ward in the Metropolitan Borough of Wigan, Greater Manchester, England. It lies on flat land on the northeast bank of the Leeds and Liverpool Canal, 2 miles (3.2 km) west of Leigh, 3 miles (4.8 km) southeast of Wigan, and 14.5 miles (23 km) west of Manchester. Abram is a dormitory village with a population of 9,855.

Historically part of Lancashire, Abram anciently formed a township and chapelry in the parish of Wigan and hundred of West Derby. Abram appears in an entry of an ancient survey of Lancashire in 1212 under the name "Edburgham".

The urbanisation and development of Abram largely coincided with the Industrial Revolution. Abram is at the centre of a coal district, and industrial scale coal mining was introduced to Abram around the middle of the 19th century with the opening of several collieries. In 1911, Abram was described as "distinctly unpicturesque ... trees are in the minority, and stunted and blackened with smoke", with "collieries, pit-banks, and railway lines" as well as "much pasture land". The Maypole Colliery Disaster in 1908 resulted in 75 deaths and profoundly changed the character of the village.

Abram's coal mining industry declined in the mid-20th century, but the village has continued to grow due to its position between Leigh, Manchester, Warrington and Wigan. To the south of the village lies Abram Flashes, a 39.6 hectares (97.9 acres) area of shallow wetlands and a Site of Special Scientific Interest. Abram has historic associations with traditional morris dancing. 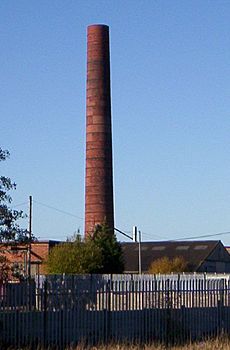 The chimney of Maypole Colliery where there was a mining accident in 1908, profoundly affecting the village.

The village name has been variously recorded as Edburgham in 1212 and Adburgham in 1246. In the 16th century it had evolved into Abraham, and by the 17th century the current name of Abram had become prevalent. It is suggested that Abram derives from Abraham, the surname of the medieval Lords of the Manor.

The manor was probably part of the larger manor of Newton until it was granted to "Warine son of Godfrey" by Henry II who reigned 1154–1189. The family adopted the name of the settlement, and remained Lords of the Manor until the 17th century. The family was ruined by the English Civil War, in which they supported the Royalists. When the last in male line of the Abraham family died in the 17th century, possession of the manor passed through many hands, and the title of Lord of the Manor was still around at the start of the 20th century although held no manorial rights.

Just after 17:00 on 18 August 1908 there was an explosion at the No 1, Cannell Mine of the Maypole Coal Pit. A total of 75 men and boys died in this mining accident. Because the explosion occurred deep underground, it was not until November 1909 that all the bodies were recovered. The inquest ruled that the explosion was caused by a combination of a buildup of coal dust and gas, and the use of explosives to bring down coal from the ceiling. The physical effects of the disaster on Abram are described as "profound"; the explosion made 44 women widows and killed the fathers of more than 120 children. At the time, Irish people were a large ethnic minority in Lancashire, making up between a quarter and a third of the populations of Leigh, St Helens, and Wigan. The Irish Catholic immigrants were seeking works on the Lancashire Coalfield, as demonstrated by the fact that 13 of the dead were Catholic migrants from Ireland. Many of the families affected by the disaster returned to Ireland shortly afterwards.

The land around Abram is generally flat and used for coal mining as well as arable farming. As a result, collieries were scattered across the landscape. The local geology consists of coal measures in the north and sandstone in the south; the soil is clayey and as a result, the area is susceptible to flooding.

To the south of the village lies Abram Flashes a 39.6-hectare (97.9-acre) Site of Special Scientific Interest (SSSI). The site lies adjacent to the Leigh Branch Canal and is part of Wigan Flashes an area of wetland stretching for 10 kilometres (6.2 mi) between Wigan and Leigh. The flashes are shallow bodies of water which originate from flooding due to subsidence caused by shallow-mining. Abram flashes was designated an SSSI in 1990 due to its biological interest which includes various habitats such as open water, swamp, tall herb fen and wet marshy grassland. 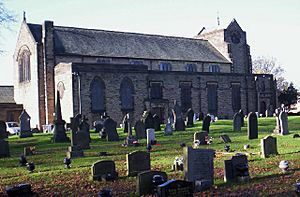 St John's Church in Abram was constructed 1935–37, and is one of the works by Austin and Paley.

The parish church of St John in Abram was constructed in 1935–1937, and is one of the works by Austin and Paley. There are two listed buildings in the village, both of which are Grade II;

Public transport in Abram is co-ordinated by Transport for Greater Manchester. A roads link Abram with other settlements, including the A573 road which bisects the town from north to south, and connects it to Wigan and Golborne. The M6 motorway runs to the southwest of the area, near Ashton in Makerfield, and is accessed via the A58 at junction 24 of the M6. 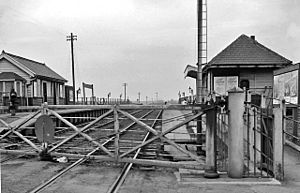 Bickershaw and Abram railway station was a station on the now closed Wigan Central to Glazebrook line. It opened along with six other stations on 1 April 1884. It closed on 2 November 1964.

There are frequent buses running through Abram with services to a variety of destinations in Greater Manchester, including services to Wigan, Leigh and Manchester.

The Leeds and Liverpool Canal passes Abram to the southwest. 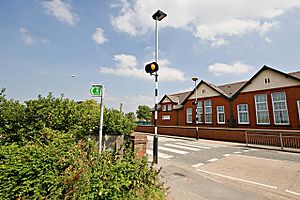 Abram Bryn Gates Primary School is one of two primary schools in the village. It lies in the Bryn Gates area of Abram.

John Elisha Grimshaw was an Abram-born recipient of the Victoria Cross, the highest military decoration awarded for valour "in the face of the enemy" to members of the British and Commonwealth forces.

Jenny Meadows is a British athlete. She attended Abram C of E Primary School on Simpkin Street and still lives in Abram today. Her main event is the 800 m, where she was European Indoor Champion in 2011.

Mick Burke was a well-known mountaineer and rescuer who lived in Abram. He lost his life on Mount Everest in 1975 whilst working as a cameraman for the BBC.

All content from Kiddle encyclopedia articles (including the article images and facts) can be freely used under Attribution-ShareAlike license, unless stated otherwise. Cite this article:
Abram, Greater Manchester Facts for Kids. Kiddle Encyclopedia.